A Ship in Distress

The ship was the pride of Papua New Guinea’s fishing fleet – 229 feet long and 1,200 gross tons.  Big enough to work the deep water, in all conditions. Spotless, new, and glittering white.  Just one year old, Glory Pacific No. 8 was fresh out of China’s Jinglu Ship Industry yards. She carried a crew of 35 under a Taiwanese master, Capt. Cheng Li Wu, sailing 2,000 miles from her homeport of Port Moresby in pursuit of the great tuna. 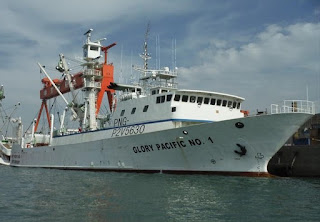 We Americans tend to take our Star Kist for granted, but before it can be packed and sold in cans, the meat must be extracted from fish, who are caught and pulled from the sea by fishermen like these working boats like Glory Pacific.  As the seas close to shore get fished out, boats sail farther and farther afield in search of tomorrow’s tuna sandwich and next week's cat food.

These purse seiners were working the waters northeast of Tokelau, a small island about 200 miles north of American Samoa.  Looking on a globe the area looks like empty deep ocean but it’s actually mile-deep water speckled with reefs and atolls and the occasional lost ship or airplane.

Deepwater fishing boats have been working this area for thirty years, with more fisherman on station every season.  But outside of those folks, and the occasional yachtsman, the area remains largely unknown to westerners.  The closest most people ever come is seven miles away – as they pass overhead in a jet to New Zealand or Australia.

It’s a remote place to be, when something goes wrong.  Of course, nothing should go wrong in a new ship, but sometimes . . . Late in the day on October 24 the generator stopped.  All the ship’s systems run on electricity, so that was bad news, and it quickly got worse.  The generator had shorted internally, and caught fire.  The fire spread, and soon the whole engine room was burning.  In a matter of minutes that whole part of the ship was in flames and the master was sending out distress calls as the crew prepared to abandon ship.

In the beginning distress calls went across the water by morse code, via shortwave radio.  Glory Pacific’s plea for help went straight up on microwaves, to the INMARSAT marine satellite communication network, who bounced their message earthward to the Maritime Rescue Coordination Centre outside of Wellington, New Zealand.

The New Zealanders respond to over 1,200 distress calls each year, so they knew what to do.  The Glory Pacific was at the extreme edge of their coverage, in the area where search responsibility is shared with the District 14 of the US Coast Guard, based in Hawaii.

The burning ship was 2,500 miles from Wellington and 2,300 miles from Barbers Point air station in Hawaii.  But the deciding factor for air support was readiness – the American Coasties had a HC130 Hercules ocean search plane ready to go and they sent it south with a crew and supplies within minutes of the call from New Zealand.

Meanwhile the ship continued to burn out of control.  In olden days, wood hull ships burned through, filled with water and sank. Today's steel ships are more resistant to sinking but everything inside the hull can still burn to a crisp.  And with the engine room on fire, there's no power to operate firefighting pumps so there is almost nothing the crew can do but flee.

Seeing that reality the crew took to rafts, which they tied together in a line.  They stayed close to their ship, but not too close, and activated their emergency position beacon, which sent its own signals to the satellite constellation. That position data was relayed to the Coast Guard, who passed the search coordinates to the boat.

After almost eight hours of flight they HC130 crew reached the area.  Oftentimes rescue crews had to fly a search pattern to find the ship and crew but thanks to the emergency position data they spotted the burning ship right away.  Darkness was falling as they flew low to drop water and flares to the sailors.  The patrol plane was surely a welcome sight, even if it couldn’t land and carry them away. The plane would continue to circle until they were rescued.

As the plane was en route the folks at RCC New Zealand had been searching the area for possible rescue ships.  Knowing they may need help at any time, many commercial vessels participate in the Automated (computerized) Mutual-assistance VEssel Rescue System, otherwise known as AMVER.  The system was originally established to assist sailors in the Atlantic but for the past 20-some years it’s grown to a worldwide network; one that a majority of large commercials ships participate in.

New Zealand dispatchers used that system to identify and alert the Marshall Islands fishing vessel Lovalo, who sailed to the scene and picked up the crew just before dawn. They held them till they could be transferred to Pacific Journey No. 1, another Port Moresby-based tuna boat that was fishing a few hundred miles away.

Thanks to modern technology and the efforts of RCC New Zealand, the US Coast Guard, and the crews of Lovalo and Pacific Journey, the entire 36 man crew was rescued unharmed.  As I write this the Glory Pacific remains adrift, as the fire burns itself out.  The ship’s owner’s have contracted a salvage firm to find the vessel and tow it to New Zealand – the nearest port with repair facilities.

After the sailors were rescued the Coast Guard crew flew their HC130 Hercules south to Pago Pago, American Samoa, the nearest place where they could rest and refuel.  The plane and crew covered 4,530 mission miles before the 2,500 mile return flight to Hawaii.

The whole thing was even captured on film, which you can seehere thanks to the US Coast Guard.

Jean Sunell said…
I have developed great respect for the coast guard as I learned just how dangerous their job is when watching their training. Thanks for sharing this, John. WOOF!
October 28, 2015 at 2:29 PM

Jean Sunell said…
I have developed great respect for the coast guard as I learned just how dangerous their job is when watching their training. Thanks for sharing this, John. WOOF!
October 28, 2015 at 2:29 PM