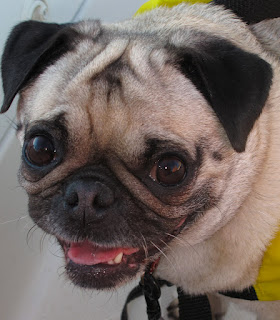 Xi’an, China – Archaeologists in this Chinese city have reportedly found what may be the earliest terra-cotta figures of domestic dogs.  The dog figurines, each about ten inches high, are believed to represent Imperial War Pugs.  They were discovered by accident during excavations at an 11th century BCE Zhou Dynasty site last week.

According to Chinese legend, War Pugs were first bred by Emperor Ku, who was said to bestow the dogs on his most favored generals.  The dogs were not meant to be warlike; indeed their serenity was said to exert a calming influence on his generals, who were otherwise known for their ruthless efficiency in battle.

The image of a War Pug standing by his General’s side, gazing impassively over a field of fallen soldiers, is iconic in Chinese literature of the period.

Though ordinary Pug dogs were exported from China legally, the purebred War Pugs remained a closely guarded secret until a few specimens were captured by British soldiers during the looting of the Summer Palace in Beijing, in 1860.    Even today, few dog fanciers know the history of this remarkable breed.

Archaeologists plan to return to the site where the figurines were discovered next month in hopes of making additional discoveries.
Email Post
Labels: imperial chinese war pug

Cynthia said…
We had a beloved pug, Wilbur. Thank you for this story.My grandson's latest obsession is dogs. His family's sweet 15-year-old mutt is on her last legs. Grandson has nominated dogs of various breeds as her successor. Pugs were the "breed-du-jour" a few weeks ago. He'll be interested in this story.
May 11, 2012 at 6:59 AM

wendy said…
My husband and I saw you speak tonight and I just want to say thank you so much. You have helped me understand my son better than anyone has ever been able to do. Thank you!
May 18, 2012 at 1:26 AM