A day at the Fair

As August comes to an end, Fair Season begins. I stopped by Northampton's Tri Country Fair today, and shot some pictures . . .

The first thing you see upon entering the fairgounds are the tractors. Here's a big Farmall diesel: 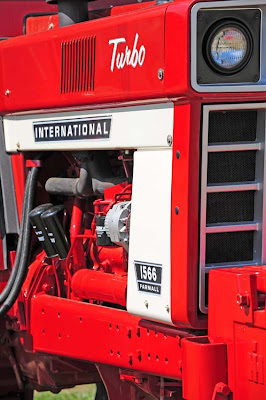 Farmall was the agricultural tractor division of International Harvester. This particular rig has 150 horsepower, and dates from 1975.

Moving out onto the Midway, you encounter seasoned carnies waiting to lure you into games of chance. Here's one right now: 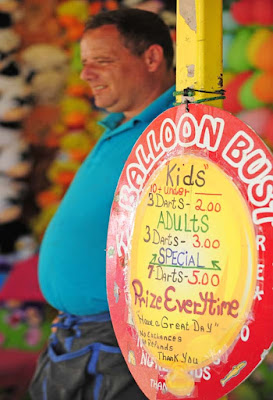 As you can see, the sign lays it out. Have a great day. No Refunds. No Exchanges. Five dollars.

Hardened Polish farmers from Hatfield and Whately stand under the glare of unshielded neon fixtures and go nose to nose with the Florida carnies. It's amazing that they don't fight more often than they do, because the name here says it all . . . 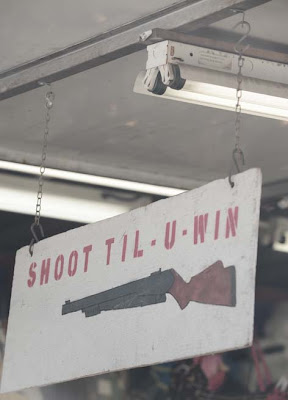 I can see Joe-Joe now, all 320 pounds of him. A pint of whiskey in his pocket and a shotgun on the counter.

I passed those games by and headed for the real action, chanpionship Pig Racing. Northampton ran its last horse races in 2005. The pigs are the only live action left. And as you can see, the betting windows are open: 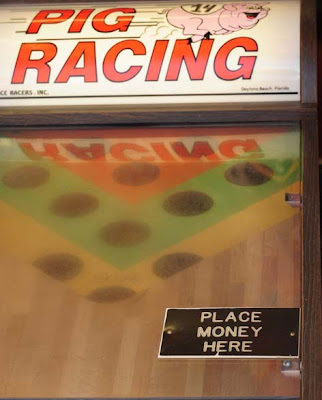 The first races started at 12:15 sharp, and I pushed and shoved my way through the crowd to get a seat by the rail at the second turn. As soon as I got seated, they were off! 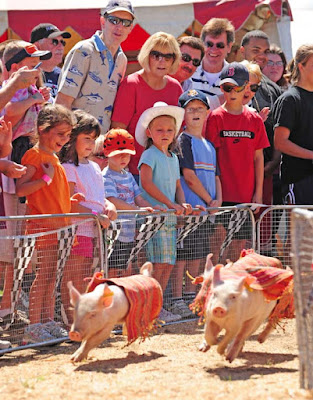 Pigmaster was favored three to one, and most of the money was on him, but in this shot you can see Pigster (a 20-1 underdog) moving smartly into the lead. The crowd is cheering, and the kids have a wary eye and their hands held high. Last year, a tyke lost a finger to a hungry porker on this very turn.

But pigs aren't the only hazard on this year's fairgrounds. We also have Tornados. Here's the warning sign above ours: 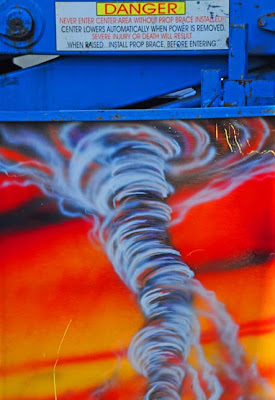 After the Running of the Pigs, I collected my money and headed out into the midway to shoot some of the rides: 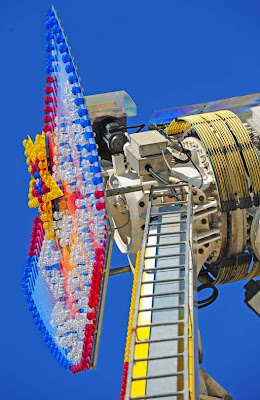 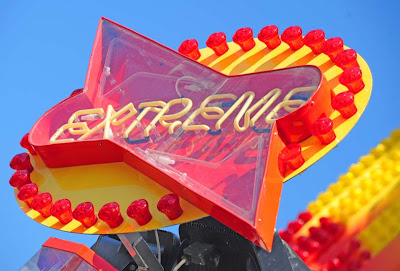 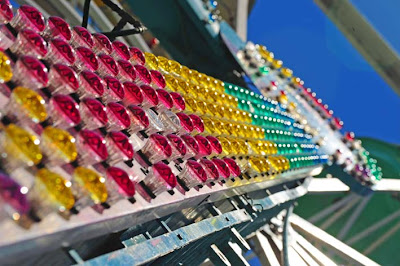 I'll go back this evening. The fairs are always better at night, as the crowd gets drunk and wild. About five o'clock they take down that "shoot till you win" sign, because they know better.

v-ness said…
hey john, great shots, ESPECIALLY the carnie with the belly and the Balloon Bust sign. i wonder how much you win if you can bust that belly? i used to like the 3-county 'back in the day' but it's gotten so dead now it makes me sad. i was never much into pissing money away by betting, but one year i took a big risk and put $4 bet on 2 horses, boxed, big-time longshots, and i won $500 bucks! big money for teh 3 county for sure. so i bought me a pair of cowgirl boots and banked the rest and never bet again. back in the early 80's i owned a $300 '68 Plymouth Satellite with a 4-barrel carb that would go like hell when you put the pedal to the metal. bob called it "skylab" because when he'd put it up on the lift at the garage, parts would fall off (anyone remember Skylab?). anyway, when my Satellite finished its 3 yr tour of duty and wouldn't pass inspection anymore i gave it to bob for the Demolition Derby and we had a blast stripping it down beforehand and painting it up with the Young's Exxon Tiger. Skylab was *still running* at the end of the Derby but didn't win because it was hopelessly hooked onto another car. before it went to the big skylab in the country, bob cut off the tiger i'd painted on the door and it still hangs in his office here in the house. yeah, those were the good old days. valerie
August 31, 2008 at 5:55 PM

Strange Behaviour said…
Carnies are a peculiar breed. It takes a special type to survive such a nomadic life sustained by hot dogs and funnel cakes.
August 31, 2008 at 6:20 PM

Polly Kahl said…
Love those images of the neon carnival ride signs. Did you ever take pictures of circus banners? Some of them, especially the vintage ones of things like the old side and freak shows are really gorgeous.
September 1, 2008 at 10:45 PM

The Girl from the Ghetto said…
I really, realy enjoy your photography. You have a good eye. I can't possibly comment on every picture I like, but just wanted to give you a blanket "Wow!"

Its nice that you have so many talents. I love writing and photography myself, so I always enjoy stopping by your blog from time to time.