Parallel Play, a new book on growing up Aspergian 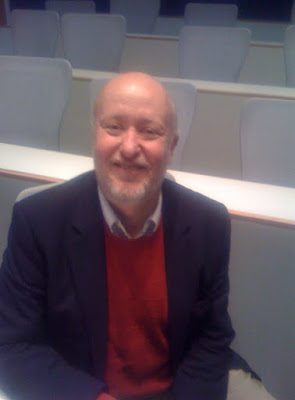 Time Page, taken at a joint appearance at the University of Missouri last winter.

My friend Tim Page is known to many people as a music critic, having won a Pulitzer at the Washington Post. What's less well known is that Tim has Asperger's. That was revealed to the world a few years ago in a moving New Yorker essay called Parallel Play.

This September 8, the book of the same name goes on sale. You can preorder it here
http://tinyurl.com/qx8vp3

Here is what I wrote about his book for the Amazon website:

The first time I saw Tim Page, I felt a sense of familiarity. He was obviously smart but shy, socially awkward, with a different cadence to his voice. There was an undefined, instinctive “something” that told me Tim was a fellow Aspergian. I feel different and excluded from much human company, but people like Tim are an exception. They are my people. They are me.

Tim says he’s lived life as an outsider, and that’s exactly how I feel too. As a result, even though I’ve grown up to find commercial success, happiness often eludes me. Within minutes of meeting Tim, it was clear he shared my essential life experience, even though we have followed very different paths. Even today, neurotypical people try to welcome us into their world, but Asperger’s blinds us to the olive branches of friendship they proffer. They even shake the leaves in front of our faces, but we just gaze, impassive and oblivious. People assume we’ve rejected them, but in truth we want their friendship and acceptance with every fiber of our being. That’s the heartbreak of it.

Tim’s story illustrates that reality with clear and moving prose. Even when he’s been with people, much of his life has been spent alone. He was always smart, but like me, I wonder what’s it’s been for. Tim story shows that genius has its benefits but it’s not a formula for happiness, or even for general life success. You’ll wonder if his extraordinary abilities are a cause or a result of his isolation. Or are they just more facets of a unique mind?

Anyone with an interest in Asperger’s and the complexity of the human mind will be fascinated by Parallel Play. It will leave you with much to think about.
Email Post
Labels: book review

jess said…
this line kills me ..

‘People assume we’ve rejected them, but in truth we want their friendship and acceptance with every fiber of our being. That’s the heartbreak of it.’

i hope the more we all talk about these inter-personal dynamics, the better chance we have of breaking down those barriers.

Anonymous said…
Hello! Our selection committee compiled an exclusive list of the Top
Autism Blogs, and yours was included in the Top 100!Check it out at http://thedailyreviewer.com/top/Autism

CS McClellan/Catana said…
I downloaded Tim's article for later reading, and have added his book to my Amazon shopping list. It's so gratifying to see a whole generation of adults coming out of the closet, so to speak.
August 14, 2009 at 12:32 PM

ThatsBaloney said…
I will definitely be reading it - thanks for the recommendation. These books help me have better insight for raising my son.
August 15, 2009 at 11:22 AM

Unknown said…
When I was first researching Asperger's, I found that essay in the New Yorker and found it fascinating! I can't wait to read the whole book! Thanks for the heads-up, John.
August 16, 2009 at 8:12 PM

Amanda said…
Your blog has really had me thinking lately, in between internet hiccups, and has lead me to a shift in perspective and a new "cross me at your peril" stance. It has struck me like a ten ton truck the total lack of awareness of my girls having feelings, just like anyone else. People presume that just because they don't have the language skills to communicate in a universally acceptable way they don't have it all going on inside. I've always had to defend their intelligence but had not latched on to the fact I should have been doing the same for their feelings. Thanks for opening my eyes. Sometimes you just can't see the wood for the trees. (sorry about that last bit but I'm hoping you'll get what I mean!)
August 18, 2009 at 11:48 AM

Paulene Angela said…
Thank you for sharing.
I have added this book to my list.

Unknown said…
Thanks for recommending this book--I will definitely check it out. I read the NYer essay as well--I don't know how I missed it before! I am the parent of a 7-year-old with Asperger's, and I find both your success and the author's so encouraging. Sometimes I look at my wonderful, maddening boy and wonder how on earth he (or I!) will ever survive elementary school, let alone middle and high school. I hold on to the hope that even if tough years ahead, he can find happiness as an adult. Doesn't sound like much to hang on to, but it's better than nothing!