A drive in the country 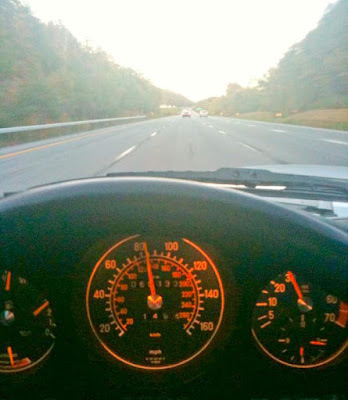 When I heard I was booked to speak in Potsdam, New York, in mid-October, I thought, That’s great! I’ll drive there. It will be a scenic trip through the foliage.

That was an innocent but foolish notion. Potsdam is 350 miles away. Mostly north. I also decided to drive a twenty-some-year-old convertible. That was another foolish notion, though it turned out ok.

Departure day dawned cool and rainy at my home in Amherst, Massachusetts. But a quick look at the Weather Channel brought good news – skies were clearing, or at least they were supposed to. You can take the old convertible, I said to myself. It will be a fine day for top down motoring.

I set out for work in a steady rain. From my office in Springfield I watched it pour all morning. Then the Weather Gods smiled on me. The rain stopped, and the skies cleared. I began to feel good about my vehicular choice, just as the choice began to malfunction.

We are in the business of servicing automobiles, so it should not surprise anyone that we serviced my own car before leaving. Oil was filled. Headlights were adjusted. And most important – the cigarette lighter power outlet was repaired. After all, we can’t take a trip without Portable Devices!

I topped the tanks with fuel, and I was off. I drove through the toll booth to the Mass Pike West as I pushed reset on the trip odometer. The old car gathered speed as we rolled around the on-ramp. It was indeed a fine fall day as I climbed the hill to Westfield and made the run up the mountains at Blandford.

The edges of the steep road were littered with overheated vehicles, but my car purred like an old dog as we motored through the Berkshires. Things changed when I reached the top. Up there, at sixteen hundred feet, the air should have been thin. But it wasn’t. It was actually thick – some would call conditions cloudy; and it started to rain.

By the time I reached Albany, there were traffic jams in addition to the rain and clouds. But I persevered, and rode them out. Finally I found clear road as the Northway opened up past Saratoga. Traffic picked up speed. I was finally on my way!

There was even fine fall scenery. I knew it was there because the signs on the road said so. Unfortunately, I did not actually see any scenery, because it was now dark, thanks to the delays from rain, traffic, and construction. Still, I was in a good mood as I listened to tunes on the iPod with my new Bose headsets.

Whenever I take a long trip by car I play music from the seventies, and it makes me wish I had stayed in music production back. Where would I be today, if I had? Would I be on top of the world making records or movies in L.A.? Or would I be in prison in Mongolia? There’s just no telling.

I had those thoughts as I passed Lake George, Ticonderoga, and Champlain. In no time at all, it was time to turn off the Northway onto country roads for the final leg of my trip. That’s where things got interesting. I had no navigation system, I was far from any cell phone coverage, and I’d never been there before. Nonetheless, I had some printed directions, which I began to follow by the light of a pocket flashlight.

Alone in the dark, I climbed into the mountains on a twisty two-lane road. I’d encounter the occasional unpaved patch, which made me wonder if this was really the right road to Potsdam, but there weren’t any alternatives visible in the dark, so I hammered along.

It started to rain, and as the elevation increased, the rain turned to snow. Top down motoring was now a distant memory. The temperature had dropped from 65 degrees at departure to 25 degrees in the mountains. There was not a single light to be seen out there, with the exception of my headlights. Not a house, or a car, or even a streetlight. Nothing.

That’s what it means to drive in the country.

As the pavement got slippery I began to notice occasional holes in the string of guardrail that lined the road at every corner. I realized those were spots were more aggressive or more foolish or simply less lucky motorists had found their destiny in the abyss below. My lights did not reach down there, and I made a special effort to avoid that fate.

As you can tell, I was successful.

As I got farther into the wilderness creatures became visible in the dark, at the fringe of my lights. I was in country where moose and bear cavorted in the road, and Wendigo hunted in the forest. Needless to say, I did not stop to play with them. The Adirondack wilderness is not a place where my position at the top of the food chain can be positively assured.

The first sign of civilization was Lake Placid, where I passed drunken revelers eating and throwing the season’s first snow. I made it through town without tangling any of them in my undercarriage. Signs for Potsdam began to appear, so I knew I was on the right path.

The weather began to clear, and I picked up speed. Now there were only occasional ice patches to turn me sideways. It was no longer a struggle to keep the car pointed forward the other 99% of the time. I reached a long straightaway where the headlights seemed to get dim, and I looked down to see the speedometer nudging the century mark. For the first time in 100 miles, I was making good time.

I arrived in Potsdam by nine, only to find the town rolled up for the evening. I battered the door of the hotel until I was admitted, and that’s where I am right now.

But I am about to venture out, to explore Scenic Potsdam. I will report more later.
Email Post
Labels: stories

Stacey said…
I am exhausted from your ordeal! I feel like you have just given me a virtual trip and it was a wonderful diversion to my morning. Thank you. Hope the rest of your time there is smooth sailing.
October 14, 2009 at 11:37 AM

Glad you made it there at last! Wonderful description of your journey.

If you would like to take a different scenic route back, I recommend you take the Plattsburgh/Burlington ferry and then travel south through Vermont. The ferry is cute, as is Burlington.

Have a great session there!

Eric said…
John, you should seriously consider writing for a car magazine such as Automobile, I love your driving and car stories. I'm guessing from the mention of multiple gas tanks that you were driving the Jaguar, a fine choice for the winding roads of the north. And your taste in music matches mine to a tee, yo would be a fine partner on a road trip. Woof!
October 14, 2009 at 12:33 PM

Julie said…
Just like a drive back to Potsdam in my college years, although I would have been skidding sideways between Watertown and Potsdam. Thanks for bringing me back. Brrr.
October 14, 2009 at 12:47 PM