New from the TMS lab and autism research 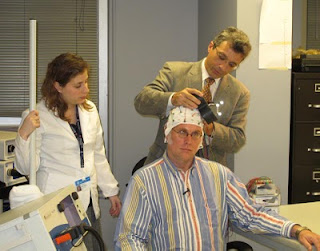 
Here are some of my other TMS autism stories:

Yogi said…
I wish I lived closer to where this is being done, as I would love to be a "guinea pig" for studies that could help future generations. (Perhaps even my great-grandkids...)
February 10, 2010 at 8:47 PM

EquiisSavant said…
What makes you surmise that if they fix the emotional circuits in Autism, they can fix the speech ?

What about the reading and writing ?

How about the working memory deficits ?

Curious what you think and why.

I'm glad you've had positive responses to the therapy, and wish you much more. I'm just curious as to whether or not you've also been taking any medications, vitamins, minerals or herbs during this same time? Just wondering if any additional interventions would enhance or negatively affect potential TMS outcomes...
February 12, 2010 at 6:42 AM

jonathan said…
If I write Lindsay Oberman will she tell me just about studies that her lab is doing or studies on the east coast or will she be able to refer me to studies on the west coast? I called the person at UCLA who heads up the TMS lab there and he never answered me back
February 14, 2010 at 5:27 PM

John Robison said…
Jonathan, I would encourage you to talk to Lindsay, either by email or by phone. I do not know how much help she'd be with sutdies at other universities though, simply because she has no way to know what they are doing. There is a 2-year lag between doing research and seeing your results in the scientific journals, so stuff happens everywhere and unless you are in the thick of it, you don't know. Lindsay is obviously focused on the work here in Boston because that's where she's been these past years.

Let me know what happens

cath c said…
john, i'm wondering if there is a way i could get my 11 year old to particpate. willing to travel. i'm sure he would be into the idea from a purely sci-fi turned reality way. as his mother, i see he is so close, but just misses a lot of basics of engagement. i know he really wants that skip in him to be resolved. very interesting watching him develop in the past year or so. like i said, so close, but the wiring is just off.
February 17, 2010 at 12:19 PM

Anonymous said…
Hi
Sorry to put this comment here. I sent out the link to you Blog post you put up about TMS . The one on FB. I tried to comment there but the comment section gets an error. The thing is I did not send the whole post but the link as I did not want to be rude. Unfortantly the link is not working for a lot of people.
As I sent out the link as a way to get people to donate to the TMS Lab 's studies I was wondering if it was OK if I could cut and paste your whole post into an email for my contact list. As I said before there is something wrong with the link. I assume it has to do with not having a blogger account as the link works fine for me.
Is it OK if I send out the whole post to my email list to drum up Donations?
vsheehan
February 20, 2010 at 6:47 AM

John Robison said…
vsheehan . . . you are welcome to copy the post but if you just give the http://jerobison.blogspot.com link I have made TMS one of the static pages. Look at the top, right below the title bar of the blog, and you will see TMS as one of the fixed choices.

Thanks for your support and efforts.

John Robison said…
EquisSavant . . . I think that about speech because Alvaro's team did a study (the results of which are now being submitted for publication) that suggests that may be the case. I don't want to pre-empt his journal article but he and I have talked about the results from a study last year, and where we might go in terms of new language studies.

Did you read any of my stories on brain plasticity? Plasticity (and abnormal differences in such) may well be implicated as a causative agent in many of the facets of autism
February 20, 2010 at 8:53 AM

John Robison said…
Tarremuggus, I take organic vitamins but not as any kind of autism therapy; I just take vitamins
February 20, 2010 at 8:54 AM

nmh-nmb said…
John - Thanks for sharing insight on TMS. My child may be participating in a pediatric study using TMS for hemiparesis (stroke).
I appreciate you sharing your experiences.
February 21, 2010 at 9:57 AM

Anonymous said…
Hi
I have received a bunch of emails saying the link for Kris Laping is not working. Could you put her full email up and or a phone number. I have people who are interested in donating money for the study but can't find contact info for Kris Laping online
Thanks
vsheehan
February 22, 2010 at 7:55 AM

Nora said…
I'm curious to see if this allows you to keep the positive parts of Aspergers and have a more neurologically typical relationship to the world. Also , is there a down side to this? I mean other than realizing how odd you used to seem to other people more directly. I know i can seem odd and i don't like feeling rejected or left out anymore than anyone else but it might seem like reviewing ones life in a whole different context to become suddenly NT !!
February 25, 2010 at 10:07 PM

jmg said…
I read your blog and Paul Levys so it was funny to see you both together and i'm very interested in the plastic brain research. My husband and my daughter have a lot of aspergian characteristics and she gave me your book to read which has helped our family understand on our good days at least. I've often thought that they didnt care when in fact they feel things very deeply. Also my husbands mother seems to be different also. Thanks for the book and the blog its very interesting.
February 26, 2010 at 9:31 PM

Anonymous said…
john! i LOVE this post and i'm so excited about the work you're doing, about this TMS.

i watched both videos and it's really true. there is a startling difference in you from one to the other. wow.

any word on your most recent project? i've been thinking of it and you.

I have been administering TMS treatment over the past few years and recently opened a new TMS treatment center (The Brain Treatment Center, www.braintreatmentcenter.com ) where we administer TMS to individuals with, among other disorders, autism. We are located on the west coast and very excited about the results that we have seen in individuals we have treated with TMS! Feel free to contact me for any questions you might have about TMS treatment, as well.
March 26, 2010 at 7:20 PM

Rachelle Jones said…
John, I have been following you for a while now, and use videos of you to help and inspire my son age 9, who is a profoundly gifted Aspergian. I also work at an office where we just got a TMS neurostar....

Unknown said…
Thanks for sharing this very informative article. TMS is widely used now a days for the treatment of depression. They said that this treatment has no side effects and can greatly alleviate the symptoms of depression.