Some thoughts on concert photography 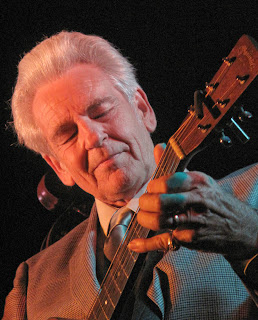 People sometimes look at my photos and say things like, “I wish I had a camera that could take pictures like yours.” I always answer that it’s not the camera, it’s how you set it and how you use it that gets the results. Last night I found myself outside a Del McCoury concert with nothing but a Canon point-n-shoot. For those who don’t know him, Del is one of the greats of bluegrass music. He’s been playing since before I was born, but he’s still vital and dynamic and full of zip. Nowadays, he’s joined on stage by his sons as he performs all over the country.
I had a choice: Drive back and get a “professional” camera, and miss most of the show, or shoot pictures with what I had. I chose the latter, and in making that Canon camera work, I recorded what I did for those of you who want to shoot your own nighttime concerts.
I began by switching off the camera flash. Flash on small cameras is meant to provide supplementary illumination for subjects five to ten feet from the camera. If you use flash to take a concert photo from the audience, the light will not even reach the stage, and the image will be black. If you are lucky enough to be really close, the flash may hit the closest performer, bathing him in an ugly white glare and leaving everything else black. The colors and shadows cast by the stage lighting are an integral part of most shows; you lose that when a flash is used.
Next, I selected manual metering mode and used the dials on the back of the camera to set film speed and exposure. For my Canon G10 I chose a sensitivity of ISO 800. I set the widest available aperture – f4.0, and a shutter speed of 1/60 of a second. That’s a reasonable rule of thumb set of settings for most cameras and most concerts. You can shoot a few shots with those settings and adjust as needed to get the exposure right for your particular venue.
I usually shoot concerts with daylight white balance, which gives a reddish cast to the images, because that’s how they seem to me in real life. You can try incandescent white balance and see what you prefer. There’s no exact answer because you are shooting performers under colored light so the shading is a matter of artistic interpretation, as opposed to absolute color accuracy. 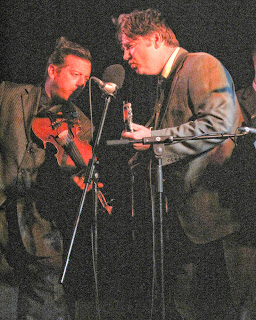 Point and shoot cameras are notorious for being really slow to respond when you push the shutter button. However, I find that my Canon responds quite a bit faster when it’s in manual mode; probably because it does not have to do a bunch of exposure calculations before each shot. The faster your camera responds, the more likely you are to catch a good shot.
That covered the setup; next comes composition.
I try to shoot a mix of vertical and horizontal compositions. If you are shooting one person, up close, a vertical (portrait) composition is often best. 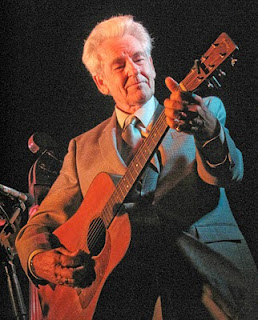 If you want to back off and shoot the whole stage you’re usually better off with a horizontal (landscape) format. 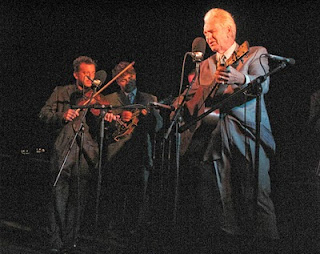 When you shoot verticals from up close pay attention to the performer’s position relative to the microphone. Try to find a shooting position where you get a clear shot of the face without a big mike in the way. 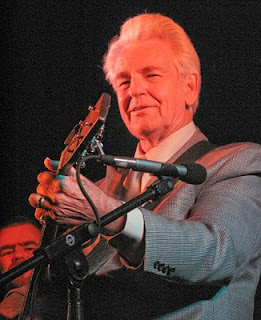 In the example above the mike is in a pretty unobtrusive place. Having the mike in the frame gives the shot context but I've learned to keep it away from the faces as much as possible.
Another thing to keep in mind is the instrument. If the performer is playing a guitar, it’s usually best to try and keep the whole neck in the frame. If you have a shot where the end of the neck is cropped out of the frame, it’s sort of like a shot where the person is cut off at the knees . . . it just looks wrong.
Think about where to shoot. At most shows the best shots are had from right in front of the stage, and if there’s no security, you may be able to just edge up there and shoot away.
Consider alternate locations, too. For example, you can get interesting shots from the sides of rear of the stage. 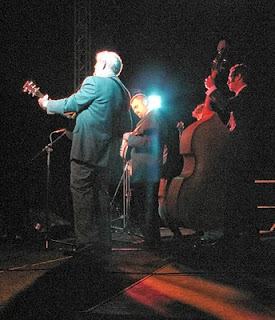 It’s a lot to think about. You have to pay attention to the exposure settings all night. If the light changes, you have to adjust your camera. You have to remain on the lookout for good shots; the best results come when you stand and wait for the good shots to come to you. That’s what I do. Lots of times the performers see me and they begin to play to me, leading me to better and better compositions as the night goes on. Of course, this isn’t always the case. Some performers don’t like being photographed and they’ll become nasty or obstreperous.
The last step is post-production. I download my images into Adobe Lightroom where I catalog my images with keywords and make adjustments to exposure and framing. I can also correct color balance there.
Most of these tips are relevant no matter what kind of camera you have. As you can see, I got pretty acceptable results with an inexpensive pocket camera; they would have only been better with better gear. But that’s not always true . . . many times they will not let you in to concerts with professional looking gear but you can walk in and shoot all night with a camera like the G10 (or its successor the G11)
Try these tips next time you’re at a concert and let me know what you think.
Email Post
Labels: music photography

Howard said…
Hi John, for the most part I agree with you. While I typically shoot concerts with a Canon 5dMKII and Canon fast glass I have on occasion used my G9 with outstanding results. I photographed Los Lobos from the front row of an opera house and you cannot tell the difference. Mainly because I was close to the stage and able to shoot at ISO 400. The G9/G10/G11 are fully adjustable however at ISO 800 there is too much noise for my needs. I use Lightroom 3, Photoshop CS5 and Nik Software but that noise is hard to get rid of. Anything below ISO 400 is very acceptable. I like to shoot concerts in Tungsten to match the stage lighting. Unlike you the red of a lot of stage lighting annoys me.

The only thing I would add for your readers is making sure the camera is held rock steady.It matters little what you use and how you set it if it is not steady when you press the shutter release. I like to hold the camera tight to my face and lock my elbows to my chest. If you must hold the camera in front of you to use the LCD viewfinder make sure to still lock your elbows. If you can support the camera on a chair or use a mono pod even better. Find a wall to support yourself with or spread your legs wide with one foot in front of the other. Do whatever it takes to hold the camera as still as possible. Color balance and exposure can be fixed to a certain extent especially if you shoot in Raw (I always do) but fixing a blurry is photograph is next to impossible.
August 29, 2010 at 8:43 PM

Penny said…
Thank you for the tips! I look forward to trying them out. I experimented with my "ordinary" camera (a little Panasonic Lumix) at night last week, not at a concert. I was down South visiting my parents, and I experimented with taking pics of the moon.

I put some of the better pics on my blog:

tilden talks... said…
i've been to an interesting cemetery in my town and taken some decent daytime pictures with an inexpensive samsung. i've been wanting to experiment with different light levels. i work at a small theme park that displays zillions of lights in december. my shots don't come out too good.
i know that my situation differs from yours, but your post gave me a little information and some ideas to try.
thank you.
August 29, 2010 at 11:14 PM

Aspeenat said…
Totally off topic but saw this artist and thought you would like them
http://www.rtist.com/bsnuffer
September 1, 2010 at 8:04 PM