Earlier this week I had the privilege of speaking to the folks at the Brooklyn Women's League.  The League operates group homes for folks with disabilities in the Hasidic Jewish part of Brooklyn.

My hosts put me up for the night at the Avenue Plaza hotel, a kosher establishment on the corner of 13th Avenue and 47th Street.

I went to bed early, and since it was a warm night, I left my fourth-floor windows open.  Why not? I'd been assured that I was in a safe area, and I'd seen the Hebrew "neighborhood watch" signs on every business.  The only folks on the street were Hasidim.  They are distinctive in their black coats and hats and white shirts, and I'd always known them as peaceful.  I'd never known them to attack or raise a ruckus.

They are a serious, conservative, quiet bunch.  Knowing that, I went to bed expecting a calm night in the suburbs.  But it wasn't meant to be . . . I was awakened at 11:30 by shouting and sirens. Looking out, I saw the intersection blocked with police cars and a mob of people.  I grabbed a camera and flashlight, and headed out the door . . . 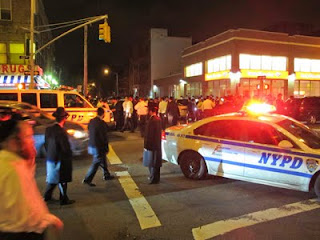 The hotel doorman had the answer. Two guys with guns tried to hold up the store over there.  He called for help on his radio, and the community turned out.  We're holding the guys for the police.  He was a proud member of the Watch.  The store keepers all have radios, and there are members everywhere in the community.  When an emergency call goes out, they move fast.  These guys didn't have a chance.  Before they knew what hit them, the store was surrounded by serious looking men in suits, and they weren't going anywhere. 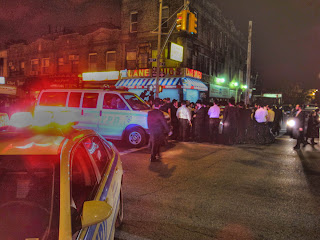 When I reached the intersection, I saw the cops had arrived but there was a huge crowd pressing up against the corner store. 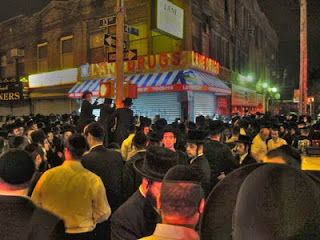 Moving closer, I found the mob had squashed the would-be robbers against the wall where they were arrested by the NYPD.  I was impressed that a crowd of unarmed men faced down two guys with guns, and won.  But where were they going to go?  Six shots would not go very far against 400 people.  They were peaceful as long as the crooks stayed surrendered, but if they started shooting, I'll bet they'd have torn them to bits.

The cops got them into the car, and the crowd reluctantly parted to let them leave. 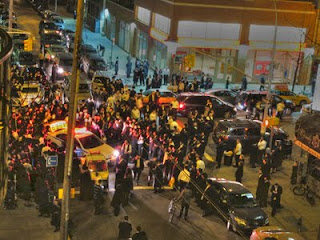 The next morning, it was as if it never happened . . . 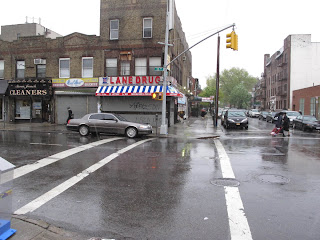 This is a community that stands up for itself.  I was impressed.  I've seen a lot of "community watch" stickers over the years, but I never saw one with that was backed up with a crew like this . . .

Kate said…
That's quite an amazing story. I am impressed, very much. The very definition of community. Also, the Hassidic Jews fascinate me, to an extent. I sometimes wonder what their lives are like.
May 4, 2011 at 11:59 PM