Earlier this week the New York Times and other media outlets ran a story about something remarkable happening on the island of Hawaii.  For the past month, lava has been flowing from the volcanic vent at Puʻu ʻŌʻō.  The flow was coming to the surface at the Kamokuna coast where it was building new land as it entered the sea.

That spectacular but ordinary process became extraordinary when a big chunk of newly created cliff face collapsed into the ocean. On New years Eve the cliff fall exposed a lava tube that led seven miles from Puʻu ʻŌʻō, and it began streaming red-hot liquid rock as if from a fire hose.  Video in the Times showed lava arcing downward sixty-some feet into the ocean below, where it exploded in spectacular fashion.

The Times story made such an impression on me that I resolved to go there and see it for myself.  I packed a Nikon D5 camera with an 80-400 lens, and set off on the journey.  There are three ways to see Hawaiian lava as it flows into the ocean.  You can take a helicopter, which gives an aerial perspective and allows access to remote sites. You can hike to the lava, but this flow was emerging from a newly formed and unstable cliff, and could not be approached closely on foot.  The final option is to take a boat.

There are several groups offering lava boat tours in Hawaii. Vessels range in size from skiffs that carry six passengers to 50-seaters with rows of seating like a tour bus.  If you are a serious photographer the only choice is a small boat for the unrestricted views.  The charter I took was operated by Kalapana Cultural Tours, a group I recommend based on their attitude, knowledge, and seamanship skills. 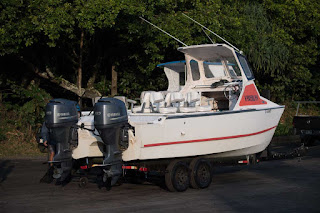 Tours run from pre-dawn to after dusk, weather permitting.  The launch site is about 14 miles from the lava flow and the trip out and back can be rough.  Luckily this trip wasn’t – it was as smooth as an ocean passage can be.  Our boat had a captain and crewman, and seats for six passengers.  It was 22 feet long and powered by two outboards.  Everyone climbed aboard while the boat was on its trailer and we launched fully loaded as there are no docks to tie up to at Isaac Hale Beach.

My own boating experience led me to choose the 5AM departure as the seas are usually smoothest before dawn, and the contrast of the lava and dark would be striking.  After being dropped in the water we headed southwest along the dark coast.  Traveling a few hundred yards offshore the water was already 300-350 feet deep.  Thanks to that the swells were minimal, even as they reared up and broke on the rocks of the shore with considerable ferocity.

The glow and steam plume from the lava entry was visible several miles away, and everyone got ready as we approached.  We arrived in darkness and the view was simply stunning.  Lava streamed from the cliff face just as the news stories had shown.  It was impressive in the news and the actuality of it was even more incredible.

The whole scene was lit by the flickering fiery strand of lava.  Sometimes it glowed like the filament of a clear lightbulb. At other moments it was shrouded in a glowing mist of steam.  There was a constant roar punctuated by the pops of steam and lava explosions.  The lava was some 2,000 degrees when it hit the water, which was over 100 feet deep even right next to shore.

To the right of the lava flow a huge crack was visible in the cliff face, reaching from the top all the way down to the water.  Being mindful of that our captain kept his engines running and faced the boat out to sea in case we needed to make a quick escape.  This also afforded us a near-perfect viewing platform.

To shoot the pictures below I used manual mode after spot metering for the glowing lava.  Shutter speed was set at 1/500 to give sharp images from a moving boat, and I used image stabilization in active mode.  By exposing for the lava most of the scene looked black on the raw images but with a high-performance camera you can push the background 4 stops in developing.  That’s usually your best bet. If you go brighter and expose for the overall scene the lava will be burned out and there is nothing to be done for that overexposure. 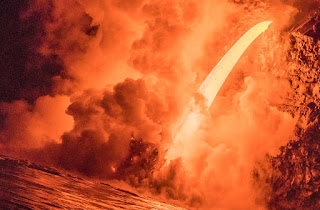 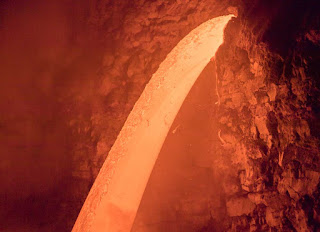 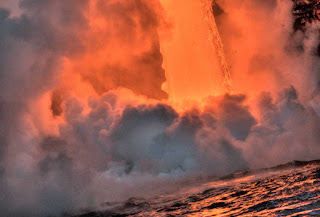 Shortly after we arrived the bigger boats appeared on the scene.  They ventured in closer to the lava, but our own captain was wary of that because of the obvious danger of cliff collapse.  Images of those boats between the lava and us gave a nice sense of perspective and drama.  Luckily nothing fell on them. 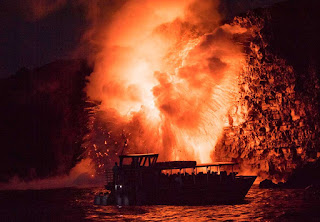 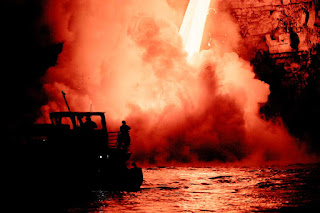 There were explosions every few seconds as chunks of the lava reacted violently with the seawater.  I successfully captured several blasts on camera.  You can do that in single shot mode if you are fast (I have a lot of practice catching those moments in performance photography) or you can use a continuous shutter at the expense of a great many wasted shots. 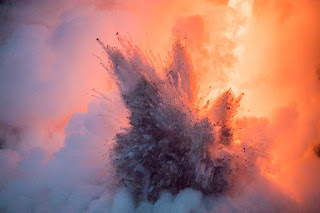 From what I saw most photographers were using 70-200 lenses but the greater reach of my 400 gave these shots a unique perspective.  I’ve found the same thing photographing music performers where the 70-200 is the typical professional’s go-to lens.  The first version of the longer Nikon lens was terrible because it lacked a focus motor and was too slow to focus at all in low light.  The current version performed flawlessly, and it has replaced my own 70-200 in most places.

One benefit of using professional gear is that it’s more rugged and weather resistant. Both those attributes are important when getting banged around on a small boat.  The smoothest of boat rides still involve considerable bouncing. Waves hit the boat and produce spray, and you may also get soaked traveling to and from the flow.  It’s a good idea to protect your gear and wipe it down afterward.

Waterproof cameras are obviously available but the common ones are simple point-and-shoot devices that will not be much use in a challenging photographic environment like this.

Hawaii is warm all the time at sea level, but it’s cool out on the water and we were glad for good windbreakers.  We were also blessed with a clear night and calm seas, without which none of these photos would have been possible.

When the lava hits the sea, it produces steam with a high concentration of hydrochloric acid. This acidic brew is toxic to breathe and will etch and damage your camera gear in very short order.  The steam is also scalding hot, as is the seawater near the ocean entry.  Those are good reasons to stay back from the flow and be very vigilant to changes in winds or sea state.  Also, be sure your lenses have clear filters screws down tightly.  If they get acid etched they can be easily replaced, where the underlying lenses cannot.

There is nowhere else in the world that lava is flowing in a stream like this.  To reach the ocean the lava flows in tubes down from the crater. In this case the crater is seven miles northwest on the Kilauea mountainside.  That crater is only visible from a helicopter at this time but you can also look in on it via the webcams of the Hawaii Volcano Observatory.  This shot shows the main crater on Kilauea, which you can drive up and see in the National Park.

Seeing the lava stream was truly a once in a lifetime experience and well worth the trip.  It’s also a welcome break for those of us who live with New England winters.

The opinions expressed here are his own.  There is no warranty expressed or implied.  While reading this essay may give you food for thought, actually printing and eating it may make you sick.

MARIPAT ROBISON said…
It was the most exciting experience of my life so far! Later that day we hiked a solidified lava lake, and the National Park ranger there said John's photographs of the lava were the best he's ever seen. JER, #autism admiration
February 5, 2017 at 5:42 PM

Joel King said…
Very exciting... set the first pic as the 'wallpaper' on my phone. Looks like CGI from an action movie. Thanks for braving the elements so that we may witness this explosion of nature!
March 3, 2017 at 7:54 PM