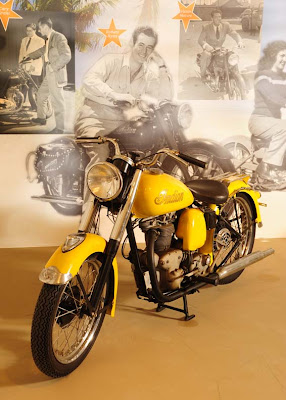 Yesterday I promised more Indians . . . well, here they are. The first shot (above) shows the 1950's models, after American production ceased. These were rebadged Britich bikes. 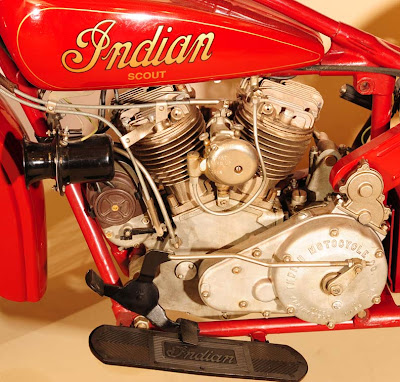 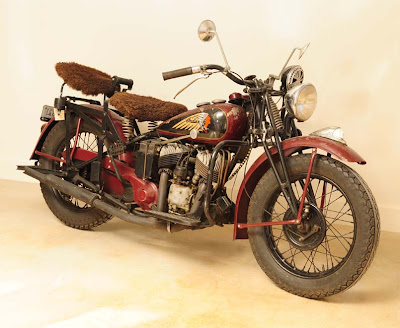 This bike happens to be the last civilian Indian built in 1942. After this bike rolled off the line Indian switched to military work for the duration of the war. 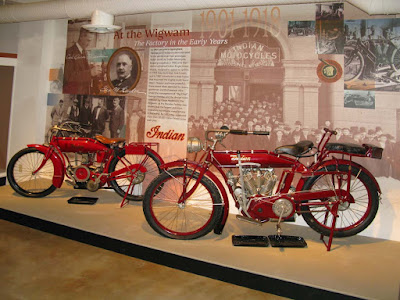 Here are two of the earliest twins. 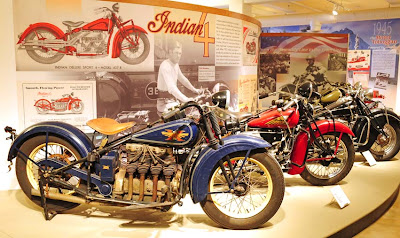 These are the famous inline Fours. 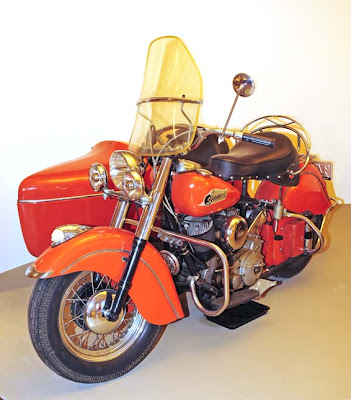 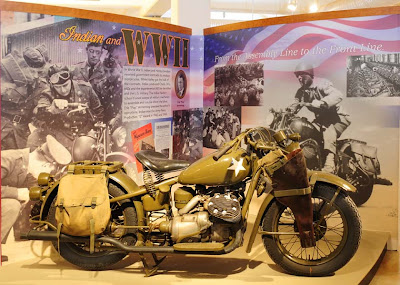 Here's one of the bikes Indian developed for desert use. 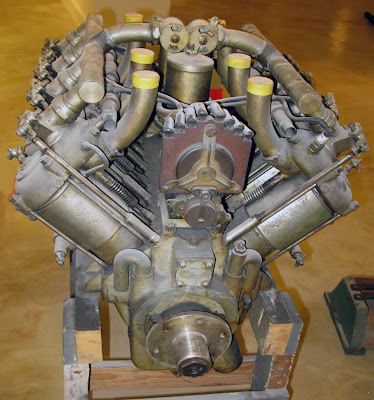 This is another creation from the war years - a watercooled V8 aero engine. 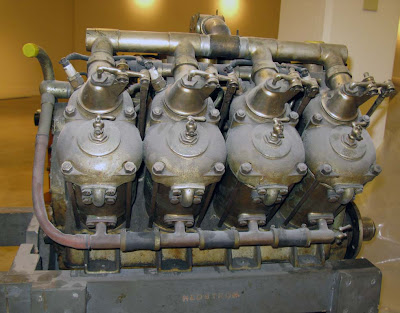 A side view of the aero engine. 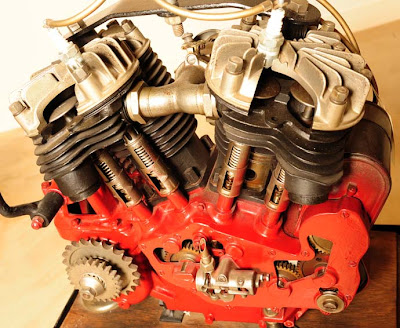 The Indian exhibit will be open for public preview during the Christmas holiday, and again during spring school break. It opens full-time Columbus Day, 2009.

Sandra Cormier said…
They are art in motion. Thanks for the lovely images.

Polly Kahl said…
These are just gorgeous, John. They have so much more character than today's vehicles.
December 26, 2008 at 7:43 PM

J.J. Hebert said…
Those are awesome. Thanks for sharing!

Unknown said…
So interesting, and great detective work on your part.

Have you seen the latest discovery by a family who inherited a vintage Bugatti from an eccentric uncle? Check it out: http://www.timesonline.co.uk/tol/driving/article5430023.ece What I would give to open a relative's garage and find a vintage Indian or two.

I’m sorry I didn’t see your “What would you say to them?” blog till today, and know that you’ve already met with them, but thought the following might be helpful for the future.

I went to a presentation on Asperger’s given by a Boston-area child psychiatrist a few years ago. He told a story about a 5th grade girl he had consulted on. When he had finished evaluating her, he met with her and her mother to tell them she had Asperger’s. He told us that after he described how many of her idiosyncratic ways of interacting and behaving were aspects of Asperger’s, he could see “the light-bulb go on” for her—she clearly understood (for the first time) that she wasn’t bizarre or crazy, just different and fairly unique. She then asked him if he could go to her classroom to explain this all to her classmates, who generally were usually mad at her, or teased her, or ignored her. The psychiatrist had never been asked to do this before, and agreed to do it.

He reported that the classroom visit was extremely successful. The kids and teacher all asked thoughtful questions, and seemed to really appreciate the struggles his patient went through in trying to get along in school and with them. He later learned that his patient was doing much better in school; she had more friends and a bigger social life. The other kids had stopped teasing her and were not as frustrated with her idiosyncrasies.

What was more amazing was what he later heard about when she went off to middle school the folowing year. While she was walking down the hallway early in the school year, some kids who didn’t know her started to tease her about the odd way she walked (she flapped her hands and arms and bounced). Immediately, some classmates from the year before saw what was happening and gathered around her. They told the other kids that she was their friend and demanded that they stop teasing her. Her adjustment to the middle school went well as her 5th grade classmates helped her through it. As he told us this, the psychiatrist had tears in his eyes (I have tears in my eyes typing this!), and said that he had never been so moved by a treatment outcome in his professional life, and he would never have thought to go to that child’s classroom on his own.

He recommended that when a child has Asperger’s that the situation not be kept a big secret. By making them public and discussable, his patient’s “differences” were put into context and became much easier to deal with, by her as well as by her teacher and classmates. Somehow we have to cut through the secrecy that privacy and HIPAA requirements place on teachers and other professionals so that kids with developmental problems—whatever they are—get support and understanding from their peers and teachers, and less anger, teasing, and shunning.
January 2, 2009 at 3:27 PM

Daily said…
those are nice looking bikes, great photos. the world's fastest indian is one of my favorite movies.
January 19, 2009 at 2:39 AM