I stood in the lobby, taking in the bright sunlight, the sound of falling water, and striking Native American sculptures.  In front of me, the casino entrance beckoned.  Inside, the ceiling lights were muted, allowing the glow of a thousand glowing slot machines to fill the room. As I moved toward the entrance the sounds of gambling drew me in.

Then I stopped.  Anyone who has ever been in a casino knows it’s a colorful and unique environment.  Yet it’s one of those places cameras are not allowed.  Neither are laptop computers, or any other electronic devices someone might use to beat the system.  There I stood, forbidden items in hand, wondering what to do.

The guards in the doorways are vigilant, and whatever they miss, the eyes in the skies catch.  Most people don’t look up, but I do, and there are casinos where I’ve seen over fifty camera domes around me.  Entranceways are often covered by five, six, and sometimes even more domes.

The domes are hiding all sorts of cameras looking at us, through us, and maybe even inside.  They run sophisticated facial recognition software to look for those who are blacklisted, and other software looks for suspicious motions and shapes.  The casino is about the most closely watched place an ordinary civilian like me can go.

I’ve passed through quite a few casinos, and I knew they were filled with bright colors and interesting characters.  Even now, I could look inside and see all the things I love in a photo.  But how would I get in? I knew being sneaky would not work; the surveillance is just too good.

I made a phone call, and got my chance.  A few months before, I’d gotten an invitation to speak at the College of the Menominee Nation, which is an hour west of Green Bay, Wisconsin.  When I flew there, I was surprised to discover the college is right next door to the tribal casino.  In fact, two of my talks were scheduled in the casino’s grand ballroom.  The opportunity was too good to pass up.

As soon as I saw the layout, I made a call to my hosts at the college.  They called the casino manager, who spoke to the security chief.  Just like that, I was in.  And that wasn’t all . . . I was not only in at Menominee, I was also in at the two nearby Oneida casinos.  I could not believe my luck.

The following morning, my hosts walked me from my hotel room into belly of the gambling machine.  Plush carpet and art gave way to hard fluorescent light, linoleum, and serious men in suits.  We met the security chief, signed in, and headed onto the floor.  “Don’t photograph the surveillance cameras,” he said.  That was all.

These pictures are the result of that visit.

The casino is filled with color, and constant undertone of the slot machines.  I really don’t know how to describe the sound.  It’s not musical yet it’s not noise, either.  It’s more of a robotic background; tinkles, clanks, and the occasional beep or brief snatch of melody.   It’s the sound of a thousand slot machines in action.

No one talks.  The gamblers are serious, focused on their machines.  Most of the players have gray hair, and a surprising number were are.  They sit back, lean forward, draw deeply on cigarettes and play.  Some push a button.  Others pull a lever.

The days of mechanical slot machines are long gone.  Everything in a modern casino is electronic.  All of it flashes, glows, and sometimes beeps or chirps.  It’s mesmerizing.

In the center of the casino, guarded by rows and rows of slots, you find the games.  There are crap tables, poker, blackjack and roulette.   There the dynamic changes. The players talk, but the language is abbreviated.  “Gimme another,” “stand,” and the patter of the dealer as he rakes the chips and deals the cards.

I saw a few hundred people in the time I walked the floor.  I don’t think one of them smiled.  A few looked angry, but the rest looked serious.  And indeed gambling is a serious business.  Whatever happens, there is always another bet.  The buttons sit there before you, glowing softly, silently taunting you to make a choice.  To lay your money down.

For some, playing the slots is a new and fun experience.  They walk in laughing as they toss ten or twenty dollars into a one-arm bandit.  There’s always the chance for a thousand dollar jackpot, but they generally know better.  When their money is gone, they smile and walk away.

Those are the people who can let it go.  I’ve seen them before, on other days in other casinos.  There were none in evidence on this trip.   The people I saw were not having fun.  They were doing what they needed to do.

I could see how the games become addictive.  I’m glad I was never tempted to gamble. 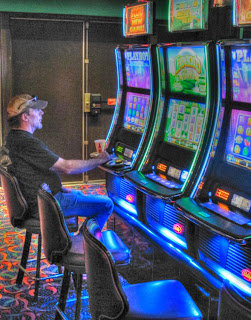 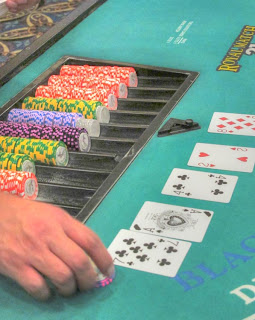 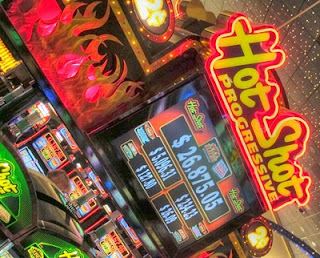 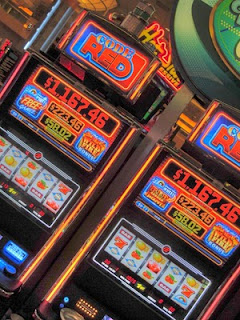 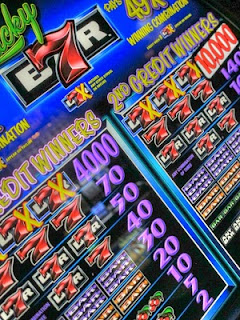 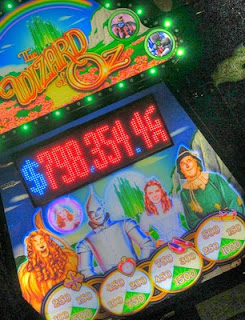 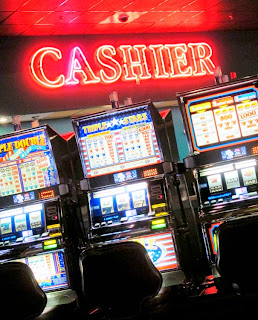 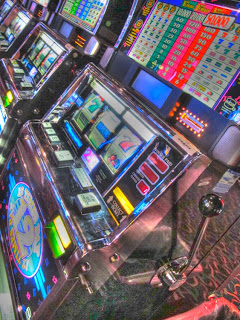 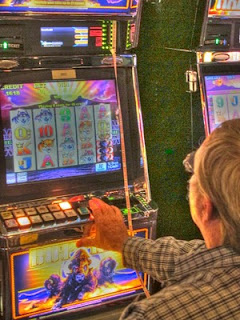 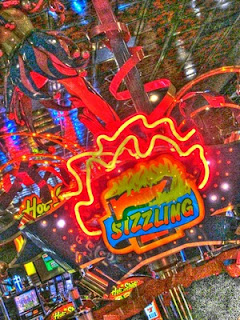 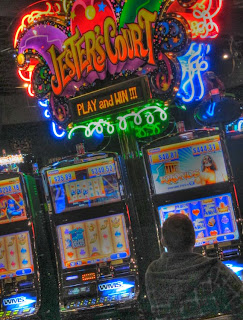 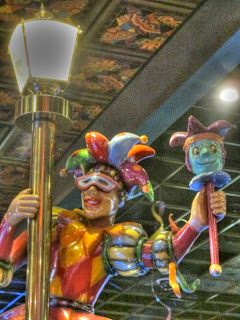 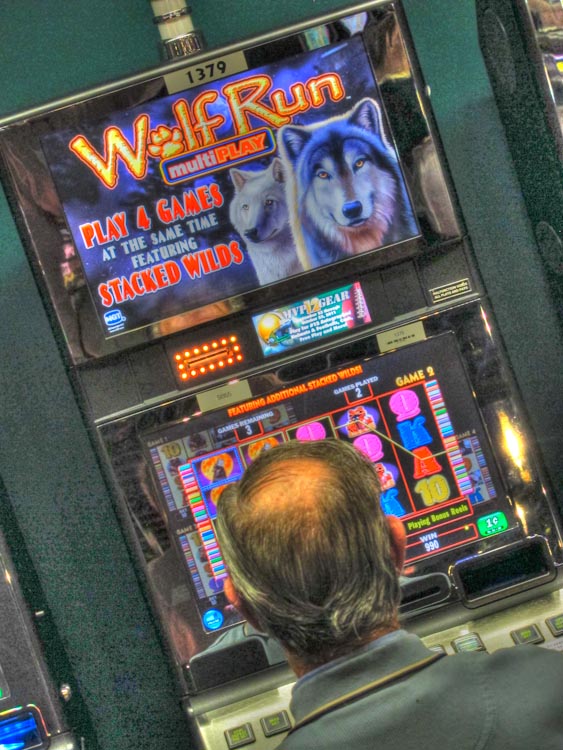 You can find more pictures on my Facebook gallery

The gambling industry is a big political issue in Australia right now, mostly due to Andrew Wilkie's stand to enforce limits. I am a fence sitter on this issue.

I see the personal tragedy, but believe that the best thing to tax is sin, and that private institutions such as those funded by gambling are at least as good and important as governmental ones.

Apart from that, I believe in the US, mostly because of how US Americans have such great business sense. Great for getting out of trouble. Like now . . . I believe in Australia for the same and other reasons.

Oh, our biggest problem right now is post-modernism and its problem child Environmentalism, now gone mad. Climate Change is almost entirely natural, not man made, as explained at www.scienceheresy.com

I know Andrew quite well. I had two long chats with him in his carpet shop about my inventions at www.ecofluidics.com . Gave him plums from our plum tree both times.

Andrew is our local senator here in Tasmania, the most politically over-represented State in the whole world. We are only half a million (40% of whom are public servants), but our senators often hold the balance of power in the national Senate, as Andrew does at present.

It is also easy to chat to senators and other pollies here in Hobart, the state capital. "The mainland" paid a high price to get Tasmania into the Australian federation ~1900. Tasmania is strategically important, like Cuba. Hence its being the 2nd colony, after New South Wales. Van Dieman's Land.

Tasmania is very old-worldish. And beautiful. Has about 100 mountain peaks above 1,000 metres high. The rugged Western half of the island is nearly all wilderness. THE most feared penal settlement in the empire was here at Sarah Island. I have a strong family connection to this region where they got Huon Pine.

Tasmania has been the preferred place of exile for Northern Europeans for ~150 years. Mostly from Britain, but from other places also, like Schleswig-Holstein, where one of my great grandfathers came from, via Queensland.

Hobart's first business, after convictism, was whaling. A potent combination: ex-convicts and mostly US whalers. It produced an extremely high density of hotels with public bars.

Oh, I have seen the world also. I am probably the first Tasmanian to have worked in Silicon Valley, was there 1969-70. I was in Stockholm, Sweden from 1966-71, and places between Finland and California.

All of which used to be so beautiful. Before so many cars as now.

polyrhythmia said…
There are unsmiling faces and bright plastic chains, and a wheel in perpetual motion. And they follow the races and pay out the gains with no show of an outward emotion.... "The Turn of a Friendly Card" Alan Parsons Project
October 2, 2011 at 5:10 PM