The bridge at Montague

Readers of Look Me in the Eye (the book, not this blog) may recall my chapter on Montagoonians. Some of you probably thought I made that name up, but I didn't. They are as real as Sunday or Jeb's beagle. Culture has come to Montague with the opening of places like the Book Mill, and fewer Montagoonians are born with webbed feet or extra eyes.

Despite that, there is still sometimes a need to get away; to escape. The bridge in this story allows safe passage across the Connecticut River, from Montague to Deerfield. The river flows fast here, and it's treacherous to try and swim. During flood, there are whirlpools that will swallow a life jacket whole and spit it back up a hundred yards downstream.

There's a road bridge just north of this span, but it's above the Deerfield, and enters Greenfield, which may not provide much relief to a fleeing Montagoonian. Not only is Greenfield not much better, the span is easily blocked by deranged natives with clubs and torches.

To me, the best thing about this bridge it the fact that it's a train bridge. Some of you may find this story on railroad bridges boring. I can understand that. Train bridges aren't for everyone. But they're not boring to me. I guess this is one of my geeky special interests, and I hope a few of you find it at least somewhat interesting.

Anyone who’s driven from Montague to Greenfield has seen the massive rail bridge that spans the Connecticut River just south of the road bridge. This Saturday, I crossed the bridge to answer a question that’s nagged me for some time . . .

Take a look at the bridge as seen from the Montague side. This is the side most people see, because there’s a public road a few hundred feet away and thousands of folks pass every day. 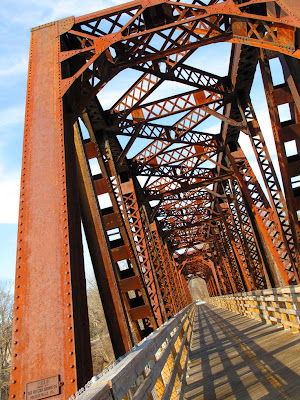 Now look at the bridge from the Deerfield side. It’s totally different. Why is that? I decided to find out. 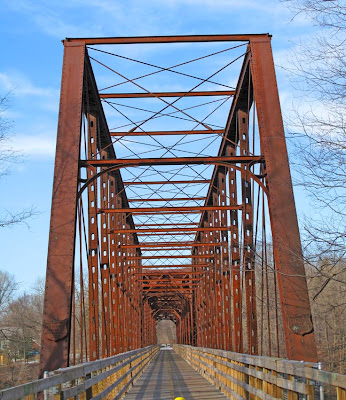 The bridge has three spans. The one shown above is made from light girders and steel tension rods. It’s kind of elegant in its airy complexity. The other two spans are much more massive. They’re what you see in the first image - heavy x-braced girders. I’d read that this bridge was damaged in a flood during the depression, and I’ve actually seen twisted steel poking up from the riverbed just south of the bridge. I realized part of the bridge must be old and part newer, but which part was which?

The maker’s plates at either side told the story. On the Deerfield side, you see this plate: 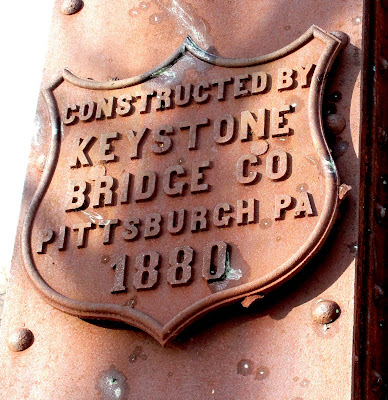 The Keystone Bridge Company was founded in 1865 by Andrew Carnegie just after he retired from the Pennsylvania Railroad. Railroads were expanding, and he saw a market for steel bridges. At the time, many railroads used rickety wooden trestle bridges, which were beginning to collapse and give passenger travel a bad reputation. At the same time, the rails were pushing west, into bigger country, where wooden trestles just couldn’t be made big enough.

In 1874, Carnegie’s firm won wide acclaim by building James Ead’s landmark bridge over the Mississippi River at St. Louis. Six years later, Keystone sold a bridge to the Fitchburg Railroad, replacing an 1845 structure they had built when the line was originally run from Fitchburg to Greenfield. Traffic on the Fitchburg line had grown tremendously since the opening of the Hoosac Tunnel through the Berkshires in 1876.

Their Connecticut Rover bridge was an engineering marvel. Look at the light but strong construction. They used riveted main girders that were assembled with huge bolts. An intricate lattice of truss rods gave the structure its necessary rigidity and strength. 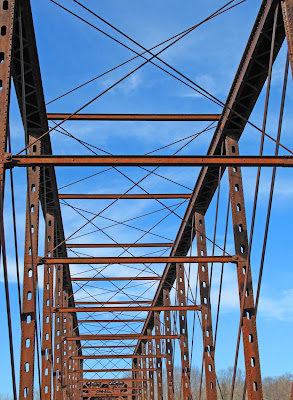 Here's a closer view of the structure: 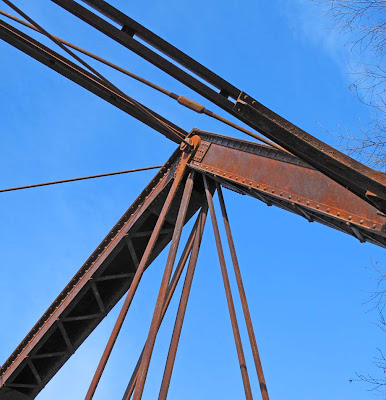 This shot shows the bolts and rods, still holding up after 130 years. 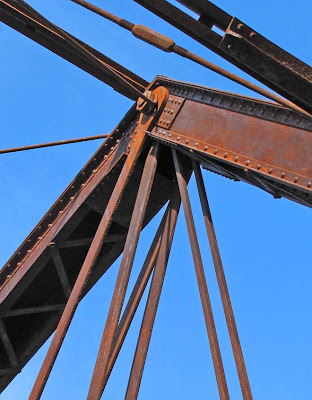 It's actually quite remarkable how well this bridge has held up without paint or upkeep. The railroad who owned it is long since bankrupt. Yet it still stands.

However, two spans washed away in the 1936 flood. Many other bridges washed away that same day. 1936 was the most destructive Connecticut River flood in recorded history. By then, the Fitchburg Railroad was gone, merged into the Boston and Maine. When the B&M looked for a replacement bridge speed of delivery was a big factor. They chose a predesigned bridge from Phoenix to replace Carnegie’s elegant structure. 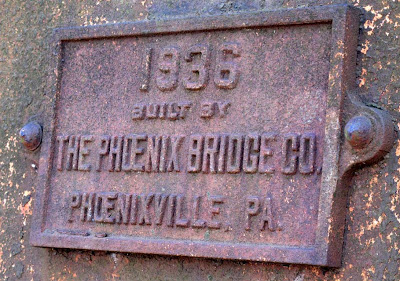 A crew from Phoenix had the replacement bridge open just a few months after the flood subsided. Rail traffic resumed, and held steady until the postwar railroad decline. Rail traffic has started to pick up again, but the tracks now cross the river a mile south, into the Deerfield yard.

The bridge has stood ever since. This section of abandoned line was developed into a rail trail four years ago.

The day after I posted this story, I realized I did not have any images of the bridge from the side. That afternoon, I resolved to remedy that deficiency. I left work early and drove to Greenfield, where I parked by the Montague City road bridge. Descending toward the riverbank the ground gave way, and I almost ended up in the river. But I didn't, and that's all that matters. Here is a view of the bridge from the side. As you can see, the different construction of the spans is not all that visible from 1/4 mile away. 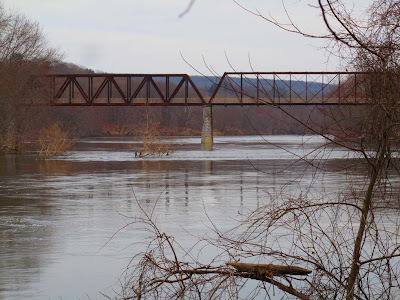 This photo shows the road bridge north of the rail bridge. It was erected at the same time (1936) as its predecessor was totally washed out in the flood. The earlier version of this bridge was made of wood, and that wood, when it headed downstream, partly triggered the failure of the rail span as it jammed up against it in the force of the current. 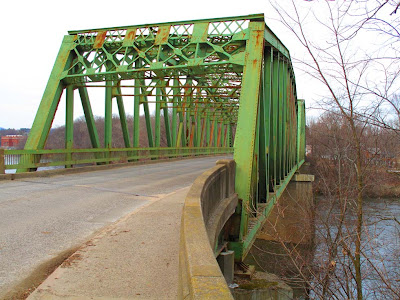 This bridge is in a sorry state. It bounced like a trampoline whenever a heavy vehicle crossed it. I was uncomfortable out there on foot, let alone in a car.

Thomas Thomas said…
Thank you John. That was very interesting. I loved the pictures of the bridge. I don't suppose you have a long view of the whole bridge.
March 15, 2009 at 11:53 PM

jess said…
i love the fact that you take the time to delve into this stuff and learn about it (and then share the knowledge with us!).

me? i'd look at it, maybe even snap a photo. i might think "wow, that's interesting. i wonder what the story is?" and then i'd go home and lie down til the thought went away.

John Robison said…
Thomas, I have just updated the story to include a side shot of the different spans.
March 16, 2009 at 6:09 PM

Thomas Thomas said…
Thanks for the updated pictures. I can see the different bridges at the mid-span support.

Years ago (In the 80s) I worked as a draftsman for a Truss Manufacturer, and my Father built houses. I grew up around construction. I have an appreciation of architecture. And since I love water, Bridges combine both of construction and water. :)

My Father told me that a dog by the way they walk could take down a bridge, and when soldiers march they break their regular rhythm so they do not damage the bridge. I believe there is a Harmonic Resonance in structures and if you hit the right vibration you can take a building down.
March 16, 2009 at 8:02 PM

Kim Rossi Stagliano said…
I lived in Cleveland for many years where they have an assortment of the most interesting bridges on the Cuyahoga river. They swing sideways, lift up, hinge up, you name it. John, you'd love it! Not sure if there are any Montagoonians there. Mostly Slavicrites. I love the architecture of bridges. Thanks for the wonderful photos, as usual.

Polly Kahl said…
That was hilarious, John. I especially loved the Phoenixville reference.
March 17, 2009 at 10:42 PM

The wooden Montague bridge floated downstream and took out the Sunderland bridge. In 2003, Ed Klewkoski of the UMass-Amherst Botany department produced a terrific film entitled "The Flood of 1936."

For those interested in such things, the winter of 1936 marked a very deep snow pack in New England. With a sustained warm spell in March, anticipating the flood, the Massachusetts Geodetic Survey marshalled Civilian Conservation Corps men to get ready to move out into the field. When the flooding subsided, the CCC men mapped the high water mark using stains on bridges and trash in trees. These maps were later published.

Dad and other Northampton Sea Scouts helped rescue those stranded by the flood.

Unknown said…
I identify with those bridges (each of them)- I lived there and witnessed the 1936 flood action, close up (only a few feet away), as the old covered bridge disappeared in wild water,amid huge ice cakes. It struck and took down the trolley bridge which was a few feet away. Both went downstream and took away 2/3 of the rail bridge you discuss in your interesting essay.

I'm very familiar with the rail bridge, 2/3 of which was replaced after the flood - played on it as a kid, walked it many times on way to work in East Deerfield rail yard and recently rode my bike across it on the new bike trail.

Thanks for evoking fond memories of my happy childhood spent with those bridges while living there on both sides (Greenfield and Montague City) of the Connecticut River.
April 21, 2011 at 1:13 PM