This past Saturday, I attended a remarkable event, called PodCamp.

I know what you’re thinking, but it wasn’t that kind of camp. Actually it wasn’t even a camp at all. There were no pods and there was no camping. It was all about using the emerging social networking sites and technologies to get along in today’s wired world.

Here is the official link: http://podcamp.pbwiki.com/PodCampWesternMass

I attended a “twitter 101” session where I actually got my own Twitter presence working. I had signed up for Twitter late one night in a Buffalo hotel room, but I never figured out how to make it work because I was distracted by the explosion of the fire alarm. Today, it functions. Thanks to PodCamp and Christine Pilch, I can now Tweet. And they are beautiful tweets, if I do say so myself. Filled with subtle overtones of snout and throat. 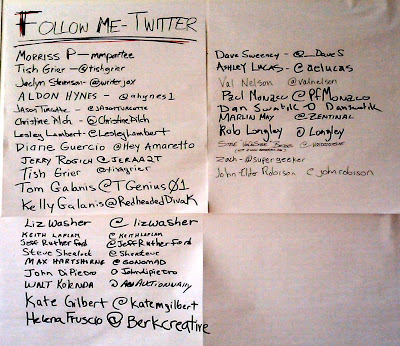 At lunch I discussed mommy bloggers and genealogy with Tish Greer. I discovered a shared Credit Union background with Morriss Partee. I ate a small sandwich, and someone told me I had traces of brownie on my cheek.

Later on, Steve Sherlock and others led me down the path to podcasting, which can be the first step on a slipperly slope to video blogs and video casting. Who knows where I will end up?

I learned lots and lots of valuable stuff and I met many interesting people. Most of all, I got a new sense of the importance of the many social networks that are emerging. And new ones pop up every day.

With my new knowledge, I cleaned up the sidebar on my Blogger blog. I improved the feeds, and added Tweets. It was easy, once I saw how to do it.

The real value of events like this are the people connections and the random tidbits that you could never have gone searching for, but once you find them, you can’t imagine how you did without them. People and tidbits, that is. Woof.

Jackie Stevenson deserves special thanks for inviting me. Without her, I’d never have known PodCamp existed. I have promised to attend the next PodCamp, somewhere in the Berkshires later this summer or fall.

I even spoke at a session. I told my own social networking story, which was kind of neat because none of the people in the audience knew anything about me, or Asperger's, or my car company. So it was a refreshing and total departure from the groups I usually speak with. It started when I achieved success at my car company, but I wanted a vague and ill-defined More. I began offering help on Land Rover bulletin boards. One thing led to another. I spoke to kids a Brightside and young adults in the jail. My father up and died. My brother outed me in Running With Scissors and Possible Side Effects. Inspired and prodded, I wrote a book. To promote the book, I started this blog. Then it took on a life of its own. I even got on FaceBook, and here I am today.

And if I can do it, anyone can.

Finally, I should also offer special thanks to the engineers at Bosch and BMW. It was their clever engineering that got my car around an unexpected corner on the way to podcamp. The newest drive-by-wire and stability control systems really do work.

But that’s another story.

Steve Sherlock said…
John, the glory of PodCamp is being able to meet and greet, learn and share; the conversations reveal the power of people coming together.

Your session, listening and discussing your stories, provided so much insight into Asberger's and building community.

The Girl from the Ghetto said…
I just started to Twitter myself last week to promote my own blog. Its interesting. And busy. Makes my brain swim. I kind of like and it kind of drives me nuts.

I have a question for you. When you were a child, where you just terrible in math? I know your schooling ended early from your book, but if you can remember far back to grade school? My stepson is an Aspie and he is in fourth grade and having a hell of a hard time in math and nothing seems to help him learn. (I am a math whiz myself and can't understand why he has trouble.

Also, why do you have your blog set up so that only people with blogger can leave comments? I'm on wordpress but had to make up a fake blogger account just to comment on here.

it was great meeting you Saturday and chatting as we did. Good to have you present, *and* hear that you learned things too. That's the whole point of a PodCamp--well, that and creating community. Many communities were formed there on Saturday that may not have otherwise. That makes me very proud :)

Val Nelson said…
John, I loved reading your take on PodCamp and I am still thinking about your PodCamp presentation that I was so lucky to stumble in to. I can't wait to read your book too.

I'm glad you are enjoying Twitter so far. I'm following you there and look forward to more of your "beautiful tweets."

Michelle (The Beartwinsmom) said…
John, I'm so glad you've decided to jump into Twitter. I've followed you, and I hope you will follow me back.

I have read your book, and enjoyed it a lot. I have twin boys, one of which has Asperger's. It's wonderful that you put your experience in print so others can learn and grow from it.

jess said…
i find it all terribly overwhelming .,. the twitter thing in particular makes me twitch (not tweet). makes me want to unplug it all and go for a really long walk.
April 1, 2009 at 10:07 AM

Unknown said…
You better be careful, podcasting is a gateway method to, like you said, video blogging. And now that the whole Video world is easier to manage, it'll just get easier.

I've brought back my podcast about my running (Gravity@1053') as I contemplate creating an Aspergian podcast for my charity ASD Athletes. The thing that kills me is the time to edit the audio... too time consuming. But yet, I type that with 3 episodes in the near future for Gravity@1053'.

I do have a Twitter for ASD Athletes, uhhh, @asdathletes, I haven't gotten that Brain Plasticity over it yet. It is still too fast and overwhelming. And I don't have a smart phone to make things... easier, I guess.