On the loose in Denver

My abode in Denver: 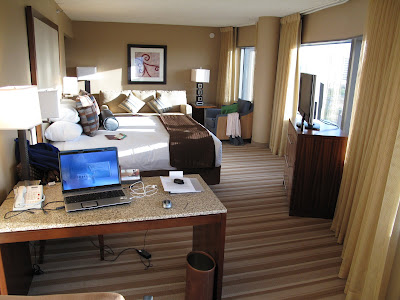 This afternoon I spoke to a large crowd at a fundraiser for Sewall child Development Center of Denver. Every now and then I’ll have people I know in the audience at these things. This time, I had my mother’s first cousin Carolyn, who brought me some pictures of our life back in Cairo, Georgia long ago.

The talk went pretty well, and we had some good questions after, including a few from a militant teacher who didn’t seem to thrilled with my treatment of my own teachers back at Amherst High. But what did she know? I figured she was sulky because some student sent her a Reversible Ursula, and she didn’t want to own up to it.

After my talk I went back to Sewall to see the facility, the tykes, and the teachers.

I came away with a few impressions:

The first thing that struck me was that the look of autism that I’ve commented on was visible in children, too. So I don’t just see it in adults. Actually, the similarity between the expressions on some of those tykes and the expressions in my own childhood photos was striking.

The next thing that hit me was how similar the behavior of those kids was to my own behavior, at that long-ago age. I sat and watched them, and remembered my own time at the Mulberry Tree School, when I was the size of today’s tykes. I even bounced and flapped my wings for a few of them. They liked that.


I watched one class of tykes dance, and I heard another bunch sing. All in all, it was a memorable and satisfying visit. Two tykes mistook me for a zoo animal and hugged me, and I almost squashed another one when I bounced in time to another tyke.


If the teachers and staff of that place are representative of the changes in tyke management since my Mulberry Tree days, things have gotten a lot better.


After leaving Sewall I walked through downtown Denver. After feeding at the Cheesecake Factory I decided to take the light rail 9 miles back to my hotel. Now, that was a treat. The rail cars are made by Siemens, and they run on modern welded rail set on concrete ties with good stone ballasting. It’s a smooth ride, and on the open stretches, they outran the cars on I-25.
On the way out of town we passed a large Union Pacific rail yard, with a line of old locomotives. Some were covered in very nice graffiti. I rode through three tunnels on the trip, with no sign of residents in any of them. I wonder where Denver’s tunnel people live? It was nothing like New York, where there are obvious signs of colonization everywhere the track descends below the street. Maybe they don’t have tunnel people in Denver.

Here's the street in Denver this afternoon: 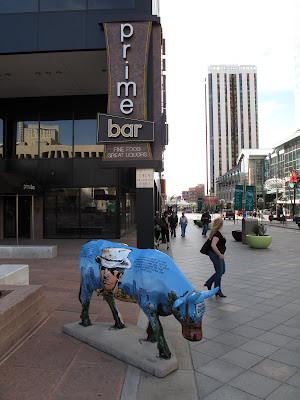 I rode the trains a few extra stops for the fun of it. When I got out it was a nice ½ mile walk to the hotel, where I am right now. 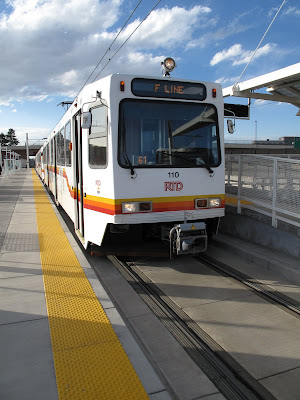 Tomorrow I’m headed for Boulder, and Google, where I will meet the team that develops Sketchup and manages their Project Spectrum. We’re going to try and do a video on that for you . . . stay tuned for more.
Email Post
Labels: book tour school speaking engagements stories

Kim Rossi Stagliano said…
Great report! Reversible Ursula is not "The Real Doll" by the way. There's a running joke about it on the radio.
May 8, 2009 at 7:11 PM

Eric said…
Great update on the trip, It's a wonderful city. The rail service reminds me of Portland, Oregon's. A very nice, clean and efficient system. You are right in that things are changing for the better for kids with Autism disorders. I have a very dear longtime friend here in Pensacola, who works with kids with a number of different issues, including several who were mis-diagnosed with ADHD and now are correctly receiving help for the Aspergers they have had all along. I gave her a copy of your book, and she was absolutely thrilled. She told me that thankfully kids are slipping through the cracks less and less now that the issue of Aspergers is on the forefront. And she too can see the difference in the look, she saw it in me years ago, but never knew what it was. She is so happy that books like yours are out there now to not only teach, but also inspire. Me thinks that sales in the Pensacola area will be increasing. Can't wait for the release of your next book. Woof.
May 8, 2009 at 9:31 PM

Anniem said…
I was so dissappointed that I was out of town on a business trip and couldn't attend the luncheon at Sewell. We are the grandparents raising a child with Asperger's so I inisted that "grandpa" attend. He just could say enough about how much he enjoyed your presentation and having the opportunity to meet you. We have learned more from you and your writing than we ever did through the medical and therapy folks over the years. The hardest and most heartbreaking thing about Andrew is his strong desires to have friends and not be labeled as disabled. The friends, after 13years still haven't shown up (they just can't keep up with his comments, hoping and flaping) but he is now (thanks to the teachers in Colorado's Jefferson County school district) able to function fairly normally in regular middle school classes. We just pray that he will develop into a fine happy man as you appear to have done. We can't wait to read the books you are working on.
P.S. The "colony" of street people you were expecting under the train bridges reside under the Arkansas River bridge.
May 9, 2009 at 11:55 AM

Jerry La Pre said…
John,
As a UMASS graduate (1974) and a teacher, I enjoyed your book very much. I'm sorry you had such a hard time as a student. Most teachers are very kind and compassionate and will bend over backwards to help all students. I had one autistic student and one with Asperger's Syndrome. They were both very intelligent boys, but very different from one another. The autistic boy was very verbal and a big hit with his classmates because of his sense of humor. The other boy was very shy and introspective. I only hope I was of some help to them.
Jerry La Pre
P.S. I live near Denver. Sorry I missed you recently. I also attende UMASS when Julius Erving played hoops there. Unfortunately, I never got to see him play until his last year as a pro. He changed the way the game is played.
May 10, 2009 at 6:04 PM

Mrs. Bartlett said…
Hi John - I enjoyed the tale of your day. If you like those cow sculptures, you might enjoy a video of our cows going out to pasture for the first time this year (I have the Aspergian farmer husband). It is the second video on my blog that you have visited before:
lovingthetasmaniandevil.wordpress.com
May 10, 2009 at 7:52 PM

Mrs. Bartlett said…
John - I enjoyed the story of your trip thus far. If you like those cow sculptures, you would enjoy the video of our cows going out to pasture for the first time this year (I have the Aspergian farmer husband) It is the second video on my blog, which you have visited before:
lovingthetasmaniandevil.wordpress.com
Enjoy the rest of your trip.
May 10, 2009 at 7:54 PM