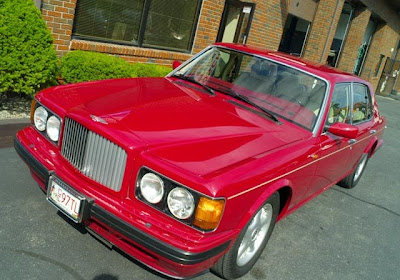 It’s that time of year again. I climbed into the Big Red Bentley and headed north. I moved out onto I-91 and muscled my way past pugnacious thugs in Escalades and granola-powered Prius drivers. My speed climbed as I approached the border. I tried to hold it back, but there's only so much one can do.

The car had a nasty shake at 85, but it smoothed out nicely over 110. Most cars struggle to attain those speeds but this brute takes them in stride. At the century mark the engine is just above fast idle, at 1,900 rpm. You’ve got six inches of travel remaining in the gas pedal, and 2,500 rpm to go on the tach. There’s a certain magic to five hundred horsepower.

These big Bentleys are the British equivalent of the old Hemi Cuda, only much more refined. At three tons, they are also considerably heavier. The weight comes in handy when the road gets rough, and you have the mass to hammer the highs spots back where they belong.

I ate up the road all the way to White River, where I took a left onto 89 North. My Beast coasted down as the exit approached, rolling past the Exit 30MPH sign at a smooth 75. I hit the bend and slewed my way around, exiting onto 89 with a subtle trail of smoke. A tip of the throttle and I was back to speed for the final run in to Stowe.

I reached my hotel only to find it was Under New Management, a euphemism for, "I'm sorry sir, your room reservation has vanished." Grabbing the hapless clerk by the throat, he regurgitated the key to 124, the room I have occupied for years, which to his great good fortune was as yet unoccupied. I wandered down the hall, where a wedding dinner was in progress, and I shared some fine wine and cheese while watching the curiously dressed wedding-partiers. So fortified, I cruised down the hill into Stowe.

By the time I arrived the block party was in full swing. I made sure my car was well hidden out behind the hotel before walking over the covered bridge to town. A Beatles tribute band was playing, and an intoxicated female dragged me into a dance as I passed. I tried to extricate myself as two drunken revelers snapped pictures. I was saved by the arrival of a freak in a Chicken Costume, singing at the top of hug lungs while swinging a heavy golf club to clear a path to the bar.

I met up with my friend Dave and we headed to the Blue Moon Grille, where we were seated and fed immediately, thanks to the economic collapse. In better days they’d have taken a reservation for next weekend, if they fed specimens like us at all. I ate grilled scallops as Dave texted his kid, who was lost somewhere on the highways of rural Vermont.

I remember being lost like that myself, years ago. In my case, it was a result of eating mushrooms. I don’t know what Dave’s kid’s excuse was. Thirty some years ago I found myself in Sherbrooke, Quebec, and when I rode through the border crossing, I was rounded up and detained by bad tempered Customs Agents for almost eight hours. By the time I got loose, the mushrooms had worn off and my money was gone. All in all, that was one bad trip.

Our reverie was interrupted by flashing lights and sirens. We saw Police outside the restaurant, and we slouched low in our seats. We didn’t think we’d done anything arrestable in Stowe but you never know . . . Sometimes the Natives get greedy, and invent laws to extract revenue from sweet innocents like us. My mind went back to the Shamokins of rural Pennsylvania, who rolled boulders into the highway so they could stop motorists and rob them. At times like that I regret leaving my preacher outfit home.

Fortunately, the cops were merely clearing the riffraff from around the stage. No one was after us. When we emerged from the Blue Moon, we refrained from song, and our refined and upright appearance made us seem the farthest thing from rabble. We passed unmolested. As the shouting subsided to the snick of handcuffs we slipped back up the hill. My Bentley and Dave’s Land Rover were safe, surrounded by British cars of all the important colors: red, white, black and most of all, green.

We retreated to our respective rooms to prepare for morning. Stay tuned for News From the Show Field, including reports on the Motorbike Jousting, Land Rover Polo and the Demolition Derby. This is, after all, the largest British Lifestyle event in the East. At least that’s what the organizers say.

More news tomorrow. Until then, sweet dreams from Northern Vermont, where the nights are cold and the cars are fast.
Email Post
Labels: car events

anomalink said…
The Brits (and Anglophiles) are so much cooler (and civilized) than the American hot rodders who invade Chittenden County this time every year.
September 18, 2009 at 11:01 PM

Pam Victor said…
John, as the Brits would say, your post was right brilliant, you cheeky monkey.

Favorite lines: "Beatles tribute band was playing, and a drunk female dragged me into a dance as I passed."

"we were seated and fed immediately, thanks to the economic collapse"

LOL! Sounds like you're having a right jolly time there. You deserve it. Enjoy.

You are a born storyteller. I'd give just about anything to be able to write like you do (never mind be able to drive a Bentley!)

Amanda said…
Pamela Victor "right brilliant" is not a typical British phrase and I would not describe John as a cheeky monkey.

Thomas Thomas said…
thanks for the narrative. looking forward to the next installment.
September 19, 2009 at 4:56 PM

Unknown said…
What a funny post. The being lost on the highway due to mushrooms part sounds familiar. Except the last thing I would have done was call my parents - mushrooms or no mushrooms.
:-)
September 20, 2009 at 7:20 PM