Meet Bill Wagner, the president of Chicopee Bank. Readers of Look Me in the Eye will know Bill and the bank from my stories. Today's I've photographed him so you can put faces to the names . . . 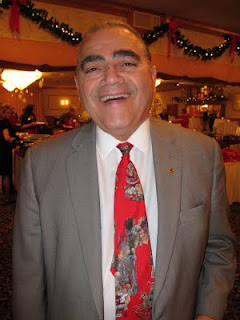 Things were tough in 1990, when Bill and I first met. I had quit my last real job to start a new business fixing cars in my driveway a few years before. Unfortunately, it took more money that I realized to start a company, and I’d lost all my savings getting going. Then the economy tanked, and the cars I had for sale were suddenly unmarketable. At the same time, I had a wife and a new baby to support.

But I had a plan. And it was working. My business – Robison Service – had grown from zero to several hundred thousand in revenues. But the question was, could I sustain the growth, or would it fail?

More than 90% of new businesses fail in the first few years. The odds were against me. Yet I had some unique traits, unproven though they were. I also had a bank breathing down my neck.

My home had been purchased with what was called a “balloon mortgage” which the bank was supposed to renew. But the bank was bought by a bigger bank, and the bigger bank failed and was taken over by a still bigger bank, and now they had sent me a notice asking for $45,000 I did not have. I applied for a new loan at the bank, and they turned me down. So did the folks at BayBank, the other big bank in town. Like many people, I assumed the big banks were the best place to go, and they have declined. What now? I had no idea . . . .

I asked everyone I knew for advice. I’d recently made friends with an aspiring accountant – Gene Cassidy – and he suggested his friend Bill Wagner, at a place called Chicopee Savings. I had never heard of them; they were certainly not a household name like Citibank, nor did they have branches in every shopping center, like BayBank. But I called him anyway, and he said he’d come see me. This is Gene, seen tonight. He's the guy on the right. The fellow on the left is Bob Greeley, one of the Kings of Springfield Real Estate. We're all a bit older. Gene runs finance now at the Eastern States Exposition, one of the biggest Fairs in the country. And I am still here at Robison Service. And writing stuff like this, of course . . . 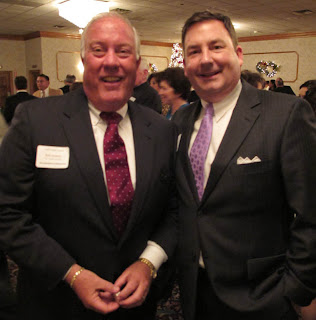 I didn’t know it at the time, but that’s how commercial lending works. And that’s what I was – a guy with a small business is a commercial customer, no matter what he wants to borrow. Consumer loans are decided today by formula; by machine. Commercial lending is all done personally, by bankers like Bill.

He drove out to see me, and he looked at what I had. He looked over my list of customers, and he looked at my operation. I thought it was pretty impressive, and he said he was impressed, but looking back . . . it was just a tiny two-bay garage, me, and some tools.

Yet at the end of his visit, Bill said, “Welcome to Chicopee Savings. It will take a little while for paperwork, but you are all set.” In the space of a brief visit, I had been measured up, evaluated, and approved. I was amazed. I had a new mortgage for my house, and a small loan for my company. Just like that.

Successful commercial lenders rely on the ability to judge people. And I guess he saw my drive and determination. Whatever he saw, it was enough. I’ve been with the bank ever since.

In the 20 years since, I can’t tell you how many businesses I’ve seen ruined by big banks. The bank gets into trouble, and they start calling commercial customers and saying “Pay up or else!” Banks can’t do that to consumers, but most commercials loans can be “called” in that manner, and if it happens, it can be ruinous for small business. But the big banks don’t care about their communities. They may say they do, but their actions belie their words.

Banks like Chicopee are what really support our communities. They also keep America’s small business running, through good times and bad. The big banks got greedy and sank billions into questionable mortgage securities, leading to the biggest government bailout in history. Smaller banks like Chicopee were wise enough to stay clear of those securities; they were not blinded by greed like the big banks. As a result, most small banks are fine today. They did not take those risks, and they remain strong. I’m proud to be a customer of Chicopee Bank.

Every year, the bank has a Christmas Social for its friends. It’s become the “in” Christmas party for greater Springfield. I almost missed this year’s event, because I had a speaking engagement at the Wilton Library in southern Connecticut today, and I have to speak at noble and Greenough in Dedham tomorrow. But I swung through Chicopee out of respect for my old friend Bill Wagner.

Hard times have come to my town again. But I’m still here, and so is my bank.

I’ve put a gallery on my Facebook page; I hope you’ll stop by and leave a comment or two . . .

jmg said…
merry christmas John from 2 aspie and 3 norm family in Aus enjoy your writing and your values enjoyed your book
December 8, 2009 at 10:33 PM

mama edge said…
It's a Wonderful Life! Sounds like you've found your very own George Bailey. Nice story.
December 9, 2009 at 7:51 AM

Paulene Angela said…
Wow, great story, nice to know you are not just viewed as a statistic on a graph by the bank.
December 9, 2009 at 8:35 AM

Kanani said…
We weren't done in by the banks, but by a healthcare system heavily slanted toward lining the pockets of healthcare insurance executives.

BUT... I have to agree with you that commercial lenders are THE BEST. When we started our practice --even though we'd been in a group practice for 13 years, Wells Fargo turned their noses up at us. So did all the other big banks. We went to Comerica Bank, and the decided to take a chance.

jess said…
so good to see some of the old school investigative banking still going on. those guys could have taught the residential guys a few things, huh?
December 10, 2009 at 1:32 PM

Eric said…
I have always supported the small banks for the same reason that you did, they really care about the local folks. My favorite bank was Greenfield Savings, and even now in Florida I deal with a small local bank with only 2 locations. But they know me by name and the service is impeccable. Great story.
December 10, 2009 at 3:54 PM

Anonymous said…
Small Banks are always best. I was quite sad to see our local Bank that I grew up with bought out by a national. The mess we are in now could of been avoided if Banks could not grow outside of there state.
I like what they are trying to do with Banks in Britain. In Britain they are fighting to have the banks restructured into Utility Banks and Casino Banks. The Utility Banks would be for local banking and small business loans and the Casino Banks would be for the large investments into National Businesses, commodities and such. I wish we could have that system here.
December 13, 2009 at 6:14 AM

Barbra The Bloggess said…
I am with a small bank, myself. Congratulations! The first year your usually in the red, too. May I recommend the book?
"Who Said So?" by Michael E. Parker.
It's changing the way a lot of folks are doing business-especially in this crazy economy.
Kudos to you!
January 6, 2010 at 3:00 PM