I'm writing you today from Breaks, an Internet cafe in Freemantle, Western Australia.  My Internet went down a few days ago in Melbourne and I've been offline for the past few days.  It's exhausting traveling this far to speak, but the people are wonderful and the scenery is striking.  This is the Indian Ocean, rolling ashore at Freemantle.  It's open sea from here to South Africa 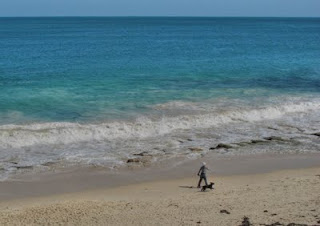 It's much easier to visit the ports here than in America.  Here's a BigLift's heavy lift ship heavy lift ship Happy Delta tied up at the container terminal.  She is brand new, as of January 2011, and can lift 800 tons between the two deck cranes.  Standard container ships, in comparison, are limited at cargos of about 40 tons per container. 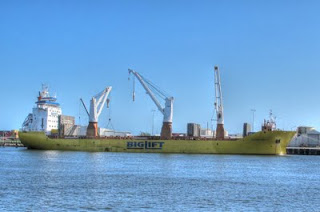 As the container crews work fisherman gaze out to sea and wait for the big one to bite. 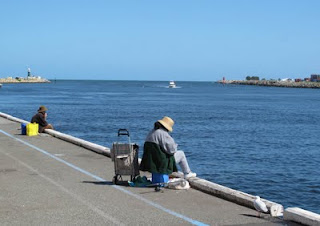 There was a Wallenius car carrier ties to the dock behind the fishermen. 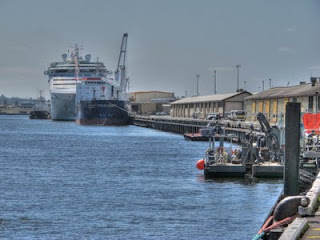 In this image you see APL RIYADH, an 850-foot container ship operated by American President Lines.  She's also a new ship, built in 2010 with the capacity to carry some 4,300 shipping containers.  She's powered by a single MAN diesel engine developing 50,000 horsepower.  That's equivalent to a dozen heavy freight locomotives, but she carries vastly more cargo than those same locomotives could pull.  That's why ocean transport is so efficient, and so inexpensive for the tons and miles moved. 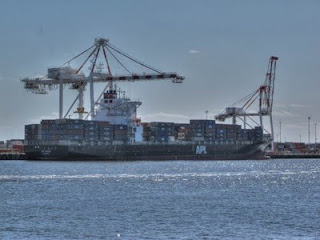 In this image you can see two slightly smaller Malaysian container ships offloading cargo.  Even a small port like this can move a great deal of traffic with container handling and ship-to-rail and ship-to-truck facilities. 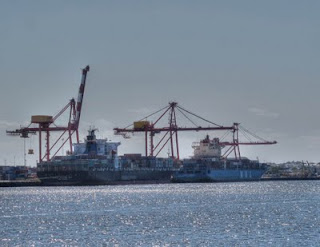 In this final shot synthetic dock lines dry in the sun 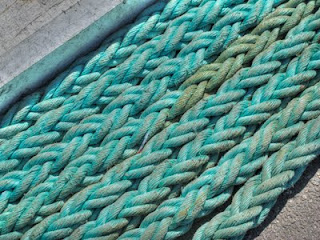 I will be speaking at the University of Western Australia in Perth this evening.  Tomorrow, I am off to Brisbane and the Writer's Festival there.  I'm looking forward to meeting more of my Australian friends in person.

sharon Morris said…
John if Id known you were interested in Fremantle i could have taken you out on our boat up the harbour. I live In South Fremantle. Next time!
September 6, 2011 at 6:38 PM

Rethink Kent said…
Hey John! Just wanted to drop you a line and say how fun it is reading about Australia and your new life as a writer/adventurer!

We'd love for you to drop by our facebook community and update us on your tours, pictures, or just say hello! http://www.facebook.com/rethinkautism

Hope to see you there!

Sharmaine said…
Hi John. I just watched your interview on TV this evening. Wish I had known you were visiting Perth and appearing at UWA. I work as an Education Assistant at a local high school. We have a special education department at our school with a few students with ASD. I noted how you said that at 6yrs old you teach your child to say "nice truck" when a child shows him his truck. How much influence do you think an EA will have trying to help teenagers socially? I am struggling to remember all the "lists" my autistic student tells/quizzes me on and know that I really should try to recite them as this may be my "link" to connect with him. Do I need to make this connection before I can try to influence his social etiquette? I already made a faux pas by telling him to look at me when I spoke to him - oops. I realised it as soon as it came out of my mouth. I know I shouldn't say this - I read your first book for goodness sake!!!
October 8, 2011 at 11:22 AM