A few of my April speaking events

On Monday, April 2, I'll be appearing with a bunch of other great speakers at Woodview Canada's conference in Hamilton, Ontario.  This conference will also include Liz Laugeson of PEERS fame, Dr. Kevin Stoddart, Robin Brennan, Celeste Carter of TEACCH, and more.

April 18 I'll be at another free event at Towson University outside Baltimore.

Hope to see you there! 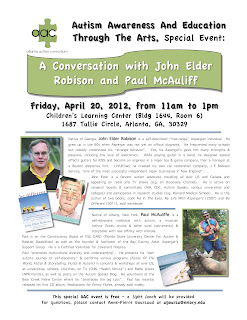 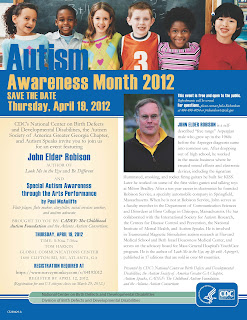 April 25 I'll be speaking with Lindsay Oberman's class in Boston

April 26 I'll be holding a talk and book signing at Elms College, right near home in Chicopee.

April 29 is the sold-out ASPEN Conference in New Jersey.

turlough said…
Thanks for the great talk on Monday night! It was great to hear some more information and to laugh with you about asperger's; I much enjoyed reading "Be different" last week. As a comment to your challenge: the only other difference I could think about that cuts both ways would be sickle cell trait. Confers relative protection from malaria, but results in some life-threatening health risks. These types differences are certainly rare and interestingly seem to be a given for any comic superhero! Hope you are having a great week, and thanks again for a wonderful evening.
April 4, 2012 at 11:54 AM