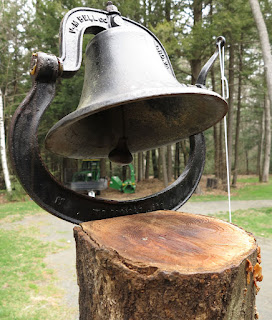 I’m sure you see this before.  You come home, walk out behind the house, and there they are.  Footprints at the base of your windows.   It’s one thing when they are human, and you have a lowlife peeping tom to contend with.  It’s something else entirely when the paw prints are from a member of the Ursus family; a black bear.

You see the claw marks at the edge of the glass, and the meaning is clear.  If he had thumbs, he would have raised the window.  And he walked all around the house, looking for one that was open.  Luckily, they were all closed tight and latched.

How long before he realizes he can just break the glass?

I asked some of the people further up the mountain what I should do.  Bear Bell, a few old timers told me.  A good size Bear Bell will chase most any critter away.  And a Bear Bell backed up by a Winchester 94 rifle is an unbeatable combination.  I took their advice.

I sawed off a tree near the house, and cut a flat face for the bracket.  It took some muscle and a big drill to get the thing up there, but it’s mounted solid.  I rigged a rope back to the house, so I can ring it in safety.  For the first few days, everything was fine.

I rang the Bear Bell, and the sound rang loud, and true.  Birds, raccoons, and weasels scattered at its sound.  It seemed like I was all set.  I rang the bell every night before bed, and the pawprints round the house faded away with the wind and the rain.  There were no more bloody patches of fur on the lawn, when I came out in the morning.  For the first time in years, I thought it might be safe to walk outside at night, without a gun and a light.

I went to bed with a new sense of security, until 2:45 AM.  That’s when I heard it.  Clang!  There was a pause, then two more clangs and crash.  At first I was startled, and then I felt the cold chill.  There is nothing more disturbing that the sound of your Bear Bell, being rung by something other than you.  A big something too, one that’s large enough to swing the handle six feet off the ground.  In the middle of a cold dark night.

I grabbed the rifle from beside the bed and ran quickly but quietly out the door at the other corner of the house.  Turning the corner, I flicked on the light to illuminate a gray shape, moving fast toward the woods.  I fired two quick shots before it vanished into the brush.

As the sound of the shot echoed away I heard a rustle behind me and turned.  Nothing was visible but the brush a dozen yards back was swaying slightly.  I turned back to where I’d fired the shots.

Walking to the spot, I saw bright fresh blood spattered on the ground.  Just then, the coyotes started howling, very close by, and I remembered there were only five more rounds left in the gun.  I hurried back inside and bolted the door.

Now it’s morning.  The Bell is still standing, and the coyotes and weasels run from the sound, but there are Bigger Creatures out there, and they seem to see my Bell as a challenge.  Tonight, I’m going to bait Snake’s old #15 bear trap with a dead rabbit, and chain it down about ten feet from the bell.  We’ll see what happens next.

Anonymous said…
Very hard core. I had friends in Michigan who used to hunt bear in the upper peninsula. Mostly crazy Civil Engineers. There is nothing more dangerous than a wounded Sow who knows where you are. I still like my remote sentry gun idea.
April 2, 2012 at 11:26 AM

LadyTexasLee said…
Please John, although I find you hysterical and I loved your book, please don't shoot the bear! It doesn't have a rifle or a human bell! It's just being a big fat cuddly cheeky bear. I suggest you fire the shots in the air next time, perhaps that might scare him away but cause no bloodshed.
Texy Lee ;)
April 5, 2012 at 4:30 PM