Today's blog is a guest post from another writer, Trish Thorpe:

My name is Trish Thorpe. I am a 53-year-old woman with an older brother (by two years) who has Aspergers Syndrome. He wasn't diagnosed until a couple of years ago. Once he was diagnosed, I understood, finally, the role that my parents played in the years of misunderstood isolation that he has endured, along with my own misunderstood self-blame. The text below attempts to shed some light on the importance of educated parenting, Aspergers, and sibling rivalry.

This post is directed to all the parents out there who struggle daily to maintain peace at home between their Aspergers Syndrome (AS) children and their neurotypical children.  My goal here is to provide a comparison between today’s awareness of Aspergers and sibling rivalry and my own unfortunate past predicament. I also hope to illuminate the importance of appropriate parenting in Aspergers families.
Thankfully, there is a lot of very insightful information available today about how to recognize and deal effectively with Aspergers and sibling rivalry—something that was desperately lacking while I was growing up.
After reading through several online resources, I can conclude that the non-AS (or neurotypical) child who has an AS sibling needs extra help with:
·       Dealing with peer and community reactions
·       Understanding their sibling’s limitations
·       Having their expectations clarified
·       Having their feelings validated
The way that each parent provides for their own children’s needs of course varies greatly.  And needless to say, not every strategy works in every situation. But the fact that you as a parent are aware of the situation and are attempting to do right your kids, in my mind, goes a long way.
Many of the online comments I’ve read are from frustrated parents who have learned, tried, and failed using various techniques to improve their family’s well-being. To them I say that it may not seem like it at the time, as your children continue to bicker vehemently or display violent meltdowns even after you’ve exhausted every strategy you’ve learned to intervene appropriately, but believe me, your efforts count.
My own story is different from any of the scenarios that I’ve read so far.  One of my parents (my Dad) actually initiated and perpetuated the sibling rivalry between me and my AS older brother. He was constantly calling attention to the differences in our abilities and playing us against each other. And even though Aspergers was not a recognized diagnosis while I was growing up (1960s and 1970s), understanding and acknowledging that there was indeed a problem seems like it should have been the appropriate parental response.
There are three siblings in my family and I’m in the middle. I have an older brother by two years who has Aspergers Syndrome and a neurotypical younger sister who is younger than my brother and me by five years. I was the athlete of the family (good at everything I tried, including schoolwork, and making friends) and my older brother was the tinkerer (“a machine aficionado” in John Robison’s words) and loner. Our Dad was horribly self-absorbed. Here are some telling images: 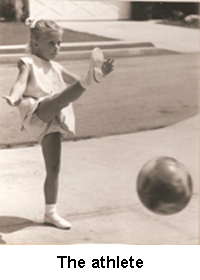 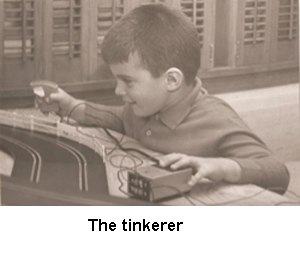 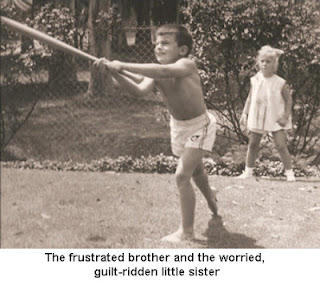 Here are a few paragraphs that describe a typical event from my past. To set the scene, my family and I were staying at a hotel in Southern California and my brother (Spencer), Dad, and I (“Fisheye” is my nickname) were playing shuffleboard. With his typically wretched disdain for my brother’s lack of athletic abilities, Dad blasted him verbally and used me as his benchmark:

Dad let Spencer push his shuffleboard disc first. Spencer pushed his disc way beyond the tip of the triangle, so his score was zero. I got to go next. I aimed my disc carefully toward the top section of the triangle.
“Good score, Fisheye! You got twenty points on that one!”
Dad’s turn. His disc slid perfectly and stopped right in the middle of the top section of the triangle.
Spencer went next. Again he pushed his disc way too hard past the tip of the triangle. Dad’s twitch was going really fast now. He stood still and glared at Spencer.
In a harsh voice, he said, “Spencer, you’re a pig! You’re not even trying! If you focused on the game and not the snack bar for once, you might be as good as your sister!”
I tried to detect humor in Dad’s eyes. Maybe he was joking. But the rest of his face looked serious and his tic was activated, so I guessed he wasn’t kidding. I immediately put my head down, hoping no one else heard Dad’s words. I must have done something terribly wrong for him to say such mean words to Spencer. The three of us silently put our shuffleboard poles back in the game shed.

You’ll notice from the excerpt above that the non-AS sibling has a tendency to automatically assign self-blame for her brother’s lack of athleticism (self-blame seems to be a recurring theme for neurotypical siblings). Needless to say, when one of the parents fuels (or initiates) the fire, a bad situation can only get worse.
My book (“Fisheye”) chronicles the long-lasting effects of bad parenting on Asperger siblings. Writing through some of the memories of worrying about my brother and blaming myself for his situation helped me a lot. I hadn’t realized what an enormous impact my Dad’s (cruel and uneducated) campaign to pit my brother and me against each other had. I realize now how my past feelings have affected everything I’ve done during the past 35 years of my life and how it affects my actions today, even though I’m much more aware of it.
So to the parents out there who are trying so desperately to be educated and sensitive to the needs of  both their AS and non-AS children, keep on! Take comfort in knowing that your efforts might feel futile, but the fact that you’re clued-in counts for a lot.
-        Trish Thorpe
“Fisheye: A Memoir”  http://www.amazon.com/Fisheye-A-Memoir-Trish-Thorpe/dp/0985328800

Thanks so much for posting my guest blog entry. Here is link to missing images: http://www.trishthorpe.com/aspergers.html. More collaboration soon I hope!

Conduct management said…
Great guest blog. This helps me a lot in understanding Interventions for challenging behavior
.
January 6, 2016 at 9:36 PM