It's been a while since I had a story on writing, even though some think this is a writer's blog.  Today's post is a guest essay from friend and fellow author Karen Dionne.  Karen may be best known as a founder of Backspace, one of the best sites on the Internet for writers of all shapes and sizes.  This fall, she's hosting a star-studded workshop in Salt Cay, Bahamas.  Here's some background about the island, and why you'd want to visit.  Assuming you're the writing type, of course . . .
* * * 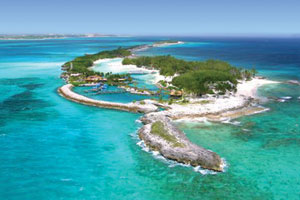 If you Google "Salt Cay, Bahamas" and select the satellite map view, off the coast of Nassau you'll see an impossibly tiny green and brown spoon-shaped strip of land in a turquoise sea.
Zoom closer, and coconut palms and white sand beaches appear. Closer still, and you can see the blue roofs of Dolphin Encounters which shelter the dolphins and sea lions that live in the lagoon.

In the late 1800s Salt Cay [pronounced "key"] was the haunt of privateers and pirates who visited the island not to bury treasure, but to cull salt from the lagoon to preserve their food. Today the island is the home of the 3 dolphins who played the famous aquatic star in the Universal Studios movie "Flipper" with Paul Hogan and Elijah Wood.
This incredibly beautiful island also has a unique literary history.
John T. McCutcheon, The Chicago Tribune's chief foreign correspondent, Pulitzer Prize winner, and dean of American political cartoonists, purchased the island in 1916 sight unseen for $17,500.

During its heyday as a social destination in the 1920s McCutcheon hosted numerous earls, counts, dukes, and duchesses. These were joined by Drew Pearson, John Dos Passos, James Thurber, Arthur Crock, Archibald MacLeish, and Kenneth Roberts.

In later years author John Marquand became the island's first regular renter. Charles Lindbergh and his wife, Anne, who were friends of Marquand, came down once for a visit, and during her stay on the island Anne Morrow Lindbergh worked on her book, Gifts From The Sea.

William Styron also vacationed on Salt Cay, where he put the finishing touches on his soon-to-be-bestseller Sophie's Choice. Styron loved Salt Cay, and dreamed of establishing a writers' colony there.

"Don't sell it," he implored the owners who were struggling to keep up with the expense of maintaining a private island. "Wait for me. I'm going to get a bundle soon."
The island sold before Styron's book did, so Styron never got the chance to fulfill his plans. But now the island's current owners are rekindling his dream by hosting the Salt Cay Writers Retreat October 20-26.

Each morning will begin with a small-group workshop crafted to provide writers with individual attention within the bonds of a close, friendly community. Afternoons will be spent writing, or exploring Salt Cay with the instructors and learning more about the writing life from the vantage point of a white sand beach. Special outings to swim with the dolphins and to experience the island's unique history are included as part of the curriculum, while evenings will be filled with nightly cocktail hours with student and faculty readings.

Styron would have been pleased.
~~~~~
Karen Dionne is the internationally published author of two science thrillers from Berkley. She is co-founder of the online writers community Backspace, and in addition to the Salt Cay Writers Retreat, she organizes the BackspaceWriters Conferences held in New York City every year.

Blog host John Elder Robison is the NY Times bestselling author of Look Me in the Eye and Be Different.  His newest book, Raising Cubby, is now in bookstores everywhere, and online in ebook and audio formats
Email Post
Labels: writing

Jennifer Good said…
My friend!! I'm only a few chapters into your Cubby book, but I love it already! I'd wager that this is going to be the best book I'll read all year....and I usually consume about 2-3 books a month. The Kid Store is something my husband and I would probably do to our potential (if any) kids. Anyway, I just wanted to let you know. I'm glad I read your first book so long ago and I was stoked (as in, I audibly gasped) when I saw this book on the shelf.
Thanks for the great writing!
May 24, 2013 at 7:35 PM