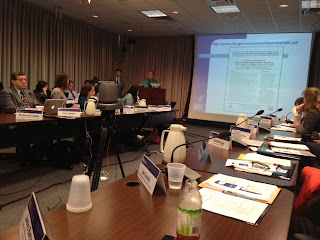 Photo:  The Interagency Autism Coordinating Committee (IACC)  in session at NIH in Bethesda, MD April 9, 2013.  IACC meetings are streamed like and archived at iacc.hhs.gov

One of the first presentations at today’s IACC meeting explained the recent NCHS survey that found a 1 in 50 prevalence of autism in American school children.  Stephen Blumberg from CDC and Michael Kogan from HRSA presented their findings and answered questions.

There has been a lot of talk about this study in the media these past few weeks. I was happy to have a chance to ask the project leaders some questions about their work.

One of the most significant points the researchers made was this:  Their research methodology differed quite a bit from the CDC methodology that led to last year’s 1 in 88 report.  That makes it impossible to compare the studies – and their results – directly.  However, we can compare this study to itself, since it was done before, in 2007.  The methodology between 2007 and last year did not change, yet the observed prevalence rose dramatically  (1 in 90 rose to 1 in 50).  Both researchers felt this change from one survey cycle to another was significant.

But does it signal growing awareness, or something else?

The researchers found that roughly a third of the autistic kids identified were diagnosed after the 2007.   Yet those kids were old enough to have been included in the original 2007 survey.   Why weren’t they counted last time?  Presumably, they were unrecognized.

In response to my question, the scientists agreed that the National Survey of Children’s Health picked up “educational autism” whereas the ADDM survey looked at medical records and only uncovered “medical autism.”  It’s no surprise that identified prevalence would vary when two different definitions are used.

Both studies returned valuable, valid findings. The actual number of people with autism may lie somewhere between the two study figures.

Some parents see issues with their children, and talk to their pediatrician.  That conversation may lead to formal autism screening and diagnosis.  Armed with that information, parents request services from their schools and their health care provider.

Other times, parents don’t notice, or don’t take action.  School staff notices abnormalities.   Tests are done, and kids are diagnosed with autism in the school.  The result:  those kids are provided with educational supports yet their diagnosis remains informal; outside the medical system.

How many of those kids would also receive a “medical” diagnosis of autism; one that would be validated by a gold-standard tool like the ADOS?  Unfortunately, we do not know.  I’m not aware of a study that has made that comparison.

There is a second issue with the NSCH study – that it is based on telephone survey.  Workers made thousands of phone calls in their attempt to interview parents, but 75% of the calls were unanswered.  When an adult did pick up the phone, the interview completion rate was approximately 54% for landlines, and 42% on cell phones.   The comparable rate for 2007 was 66%

When so many people opt out of a study on disabilities in kids, it stands to reason that many simply felt their kids had no issues so there’s no reason to take part.  That may well result in a bias toward parents whose kids have issues, and a higher identified prevalence.

So what can you take away from this latest news?

This study, and many others in recent years, highlights the huge and growing number of kids who need special services in school.  As the numbers of special needs diagnoses have skyrocketed, school budgets have stagnated.  How will we – as a society – address this growing gap between identified need and voter-funded support to address it?

The differences in methodology between this study and the earlier CDC work preclude direct comparison.  To me, this latest study confirms what many of us have suspected – there is an explosion of autism awareness, especially among parents – since 2008.  That’s a good thing, when it leads to more successful kids.  Are there circumstances where it’s not so good?

This latest study provides autism advocates with another piece of ammunition to argue for greater funding for services and support.  At the same time, we must recognize that opponents of funding increases will use studies like this, and the recent news of ADHD prevalence (mentioned in the NY Times and other media) as justification for another claim: that there is an epidemic of over-diagnosis that should not be matched with increased funding.  So the study will be used both for and against our community.

The final point I’ll offer is that this recent study is once again limited to a description of autism in kids.   Just as we distinguish mildly affected kids with educational autism diagnoses, we might distinguish geeky undiagnosed adults from their more significantly affected adult peers.  If this study is a guide, that geeky population who might benefit from some support may be much bigger than previously imagined.

John Elder Robison is an adult with autism.  He’s the author of three books on autism and difference – Raising Cubby (2013), Be Different (2011) and Look Me in the Eye (2007)
Email Post
Labels: autism community diagnosis IACC

needle.and.damage.done said…
"When so many people opt out of a study on disabilities in kids, it stands to reason that many simply felt their kids had no issues so there’s no reason to take part."

I disagree. I think it indicates that the question is invasive and parents want their privacy.
April 9, 2013 at 3:07 PM

John Robison said…
While I agree that many people find these sorts of surveys intrusive, it's not unreasonable to suppose that those who have a personal stake in the questions would have more inventive to put their aversion aside and participate. Thanks for your thoughts.
April 9, 2013 at 3:15 PM

John Robison said…
Autism News, I take that to show that the actual age of diagnosis still lags quite a few years behind what our capabilities would allow for. We have good tests and screens for kids half that age, but all too often they still don't get picked up till they are 8-9-10 Thanks
April 9, 2013 at 3:46 PM

Unknown said…
Super good question John. I could see collective groups of people supporting their autistic children by establishing LLC's to pool resources for lifelong education and healthcare services as an alternative to the HMO/ massive insurance company model. I think Ben Carson, the neurosurgeon proposed something similar though I'm not a fan of all of his policy positions.
April 12, 2013 at 2:45 PM