The first stop on the Look Me in the Eye paperback tour was River Run books in Portsmouth, NH. I told stories, answered questions, and signed books for a few hours, starting at 7PM. My brother was at this same bookstore a few months back, talking about his new book, A Wolf at the Table.

It was a good beginning . . . the first time I've spoken about the New and Improved version of the book, and what's going on now. The event was co-sponsored by the Birchtree Center, a local autism/Asperger program.

Right after that, I did an interview for the Psychjourney Podcast series. You can listen to it here: http://psychjourney_blogs.typepad.com/psychjourney_podcasts/2008/09/look-me-in-the.html

I've left River Run with plenty of signed copies, and I've also signed the stock at the Portsmouth B&N. I try and sign stock wherever I go . . . right now, you can find signed books at the Amherst/Northampton independent book stores (where I live) plus B&N stores in Holyoke and Hadley, MA, and Enfield CT. You can get signed hardcovers and paperbacks at Borders in Holyoke, MA.

Before the event, I was able to shoot these photos of the seaport. The first shot shows three Moran tugs at rest. The second shows the Hamburg Pearl delivering a cargo of salt to the mineral terminal. Her load of salt will be spread on roads all over New England in just a few more months.

For any of you in Vermont or upstate New York . . . my next appearance is tomorrow, Saturday, at the Burlington Book Festival. I will be appearing at one, followed by a small group discussion with a local Asperger group and an author dinner that night. Stop by if you're around.

And it's just one more week till the British Invasion, followed by my west coast tour - LA, San Francisco, Boulder, Vail, Portland, Seattle, Dayton. I hope to see many of you on the road. 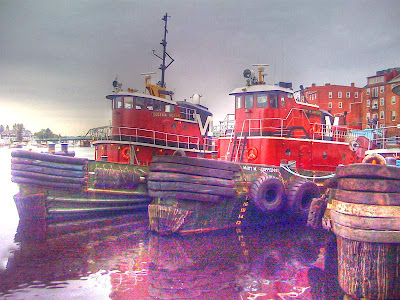 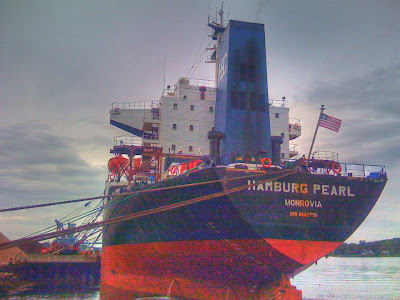 bristowmom said…
Awesome pictures. I especially love the one of the tugboats.
September 12, 2008 at 9:12 AM

Sounds like the River Run Reading went well too. I am still disappointed I missed it...come back to NH! Actually, there is a really cool, very cute bookstore here in Wolfeboro...I should talk to them about you...hmmmm.
September 12, 2008 at 10:36 AM

M@ said…
I was in Vermont a couple of weeks ago. Well, I've got everything your brother's written, including the latest, so I'll be sure to pick up your book. Interesting.
September 12, 2008 at 10:36 AM

~ ANNE said…
Look forward to meeting you in person John! I left word on your phone - still on for Sunday and very hopeful to get down to the beautiful Burlington waterfront tomorrow at 1:00pm. Until then - ANNE
September 12, 2008 at 9:01 PM

Melody Platz said…
What part of Britain will you be in? I live in Pittsburgh, which I hope you will come visist someday soon. But I have loved everything English since I watched Masterpiece Theatre as a kid.

I've been to London and Edinburgh, and I can't wait to go back again someday. : )

As long as you're going to be in St. Charles, IL in December, you might think about having your publicist to contact The Book Stall in Winnetka. Also Barbara's Books in Oak Park. They're both indy booksellers and have an active list of author events. My husband and I would love to meet you in person.

Strange Behaviour said…
My middle child has been ticking off the days on her calendar til the 21st in Hollyweird. She's impressed with you; "that dude put all his weird life in a book, maybe I will too. It would be neat if people could understand me too." She can't wait to meet you.
September 13, 2008 at 9:45 PM

Rock and Roll Mama said…
Sweet! Great pictures. Still crossing my fingers for you to show up near DC one of these days.
September 13, 2008 at 10:34 PM

Unknown said…
I absolutely LOVED the podcast at psychjourney. Will you be traveling to Florida to speak?
September 14, 2008 at 4:10 PM

John Robison said…
Jess, the Moran tugs have black hulls and it's their lack reflection you see in the water.

Ellen . . . I do expect to do some Florida dates closer to the holidays. Stay tuned.

Melody . . .I'm sorry to say I don't have any English dates scheduled.

liveandlearn said…
I was so inspired by your Portsmouth visit. I asked you a question toward the end of the Q&A and I must have made some sort of impression, because I had over 12 women approach me after your talk, while you were signing books.They all had sons, like myself with AS. Most had just learned of the diagnosis, my son just turned 13, and he was diagnosed at age 6/7, so I've read a lot of books, been exposed to great teachers, a life changing therapist.By being at River Run that night,hearing you&having other mothers approach me, I want to form an AS support group in Portmouth NH.Please help me to reach out to those women who were there that night too.Thnx
October 14, 2008 at 10:57 PM

John Robison said…
Liveandlearn, I have no way to connect to the people who attended the Portsmouth talk. If you want to for a local support group I suggest contacting the Asperger Association. www.aane.org.
October 15, 2008 at 7:03 AM