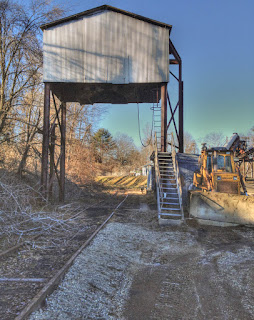 Are you ready for Christmas once again?  I’m getting there . . .

When it came time to wrap the presents for tomorrow, I found my supply of coal depleted.  Nothing remained but a few crumbs. Local urchins must have been pilfering when I wasn’t looking.  Something had to be done, and fast.

I drove a few miles north to an area where the railroad runs close to Northeast street.  Parking the car in the weeds, I set off down the track.  A mile or so later, my objective came into sight:  the old University coaling station.

I walked down the line until I reached the end, where years of coal cars had covered the ground in fine black gravel.  Bending down to scoop a few handfuls, my eye was drawn by a glitter just ahead.

I’ve walked thought that area countless times, and realized I had missed it all those years.  Millions of pounds of coal had arrived through that siding, all to be burned at the University heating plant.  So what happened to the residue?  The ash and slag were cleaned out of the furnaces on a regular basis.

Some of the ash was used by the Mortuary College, to train future crematory operators. Others in the same program practiced disposal, spreading the ash in a fine layer over the School of Farming’s fields.

They never did find a use for the hard, glittery slag.  In the end, the bigger chunks were piled next to the coal, and loaded onto trains for disposal somewhere out West.  Somewhere in the desert, whole neighborhoods have been built on University slag, held together with fine cemented fly ash.

The power station is long closed, replaced by an efficient nuclear reactor, but the siding remains, rusting away slowly.  The brightest gems of slag are gone, but I found enough glittery bits to make a special Christmas indeed.

Combined with a few handfuls of fine pebble coal, the effect will be memorable.

I’m off to get ready.  The kids are coming soon.
Email Post

Justthisguy said…
I just saw the NY Times with the article about your kid in it. From glancing at it, it seems like a fair treatment, though written in their usual supercilious annoying style. Also, the kid looks better in the pictures you take of him.
December 27, 2011 at 1:57 AM

Justthisguy said…
P.s. What the hell is wrong with the grownups these days? All _real_ boys play with explosives, and have always done so. I myself got a trip to the emergency room when a kid with a really spectacular powder burn to the face.
December 27, 2011 at 2:04 AM

Justthisguy said…
P.p.s. My powder-burned face got me chased out of my ninth-grade algebra class. The Doc gave me some greasy ointment to put on my blackened face, and yes I looked horrible. Apparently the last straw was my peeling off the burnt greasy skin (hey, it was no worse than a bad sun-burn) and eating it.

This caused the gal who was sitting next to me to get all nauseous, and the teacher to tell me to leave the room. I went to the library and had a good time with a book until some administrative busybody looked me up.
December 27, 2011 at 4:32 AM

lovedyourmemoir said…
Some boys do way better than you guys.

Whatever happened to Jim Boughton?

Got Look me the Eye for myself this Christmas and could not put it down after I picked it up this morning.
It was great!
...am wondering about short circuit thinking when I was younger......

John Robison said…
Jim is a chemist at a munitions manufacturer in Arkansas
December 28, 2011 at 10:13 PM

Anonymous said…
Interesting. I wonder if John can "walk" through the depot in his imagination? I can do that with each of my old apartments. And of course its not perfect. I need to have generally been to the place I'm trying to imagine for spatial mapping a few times for details. And it helps if there is a nice unique set of details for spatial mapping. For example, the Army Surplus place I go to has a poster of Marilyn Monroe in a bomber jacket near the back of the store. That poster is my starting point for all the landmarks in the store. Then I start filling in data from there. Human's are still evolving. But we remain stuck in these silly patterns because "that's the way we've always done it." Imagine if you were to have a person with a combination of bipolar depressive traits and Aspergian stuff? They might not be happy or well adjusted but imagine what they might be able to accomplish?
January 1, 2012 at 1:31 PM