Some thoughts on the trades 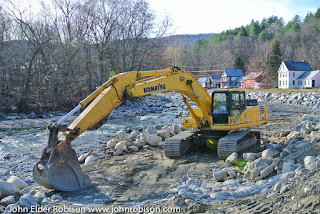 This weekend I finished another excellent book about our economy, and how we might recover from recession.  One of the suggestions was that we should become better educated, as a society.  To bolster that point, the author talked about college graduation rates, and the limited prospects for non-college-graduates who end up with low paying service jobs.

Where are the trades, in that writer’s mind?

All too often, writers divide the world of work into “educated and professional” labor performed by college graduates, and “minimum wage service work” performed by the unwashed masses; those of us who did not make it out of college or perhaps even out of high school.

That depiction does a great disservice to our young people as they contemplate their future career paths.  For the trades still offer tremendous opportunity, and they are overlooked more and more today.

So what are the trades, you ask?  Trades are specialized jobs that are taught by doing.  People who work in the trades use both their hands and their minds to reason through problems and produce tangible results.  In years past you learned a trade by being an apprentice.  Today, you might learn a trade at a trade school, or academy.  And some apprentice programs still exist.

All of those jobs require substantial skill that is developed through both study and practice, and all have different levels.  One starts out at low wages as an apprentice, while masters make as much as most people in “professional” jobs.

The next step up from being a master is to own a small business that employs other tradesmen. Examples are my auto service company, or a local electrical contractor.  Owners of successful trade business can make as much or more money than even high-level professionals, like doctors or lawyers.

Yet the path to success does not generally pass through a college and it is often overlooked.

There are three hundred million people here in America.  It’s tradesmen who construct the places where we live.  Tradesmen bring us the electric power, and the plumbing.   Tradesmen fix our cars and trucks.  The beauty of the trades is that they are not going anywhere.  No one is outsourcing those jobs to India or China.

It’s true that the trades change.  The job of fixing cars has changed tremendously over the past twenty years, as has the job of wiring a house or even installing plumbing.  But everything changes.  We all have to learn and adapt.

In some cases, fewer workers are needed in a given area.  Construction trades are a good example of that today.  With the housing collapse, we have a surplus of tradesmen who know how to work new construction.  Yet we still have jobs in other trades, like auto repair, and we even have jobs for carpenters, plumbers and electricians in repair and maintenance.

I find working on things I can pick up and handle very satisfying.  I know many other tradesmen feel the same.  I like to fix something, see it work, and know it’s a job well done.  That sense of personal connection and satisfaction is missing in all too many jobs today.

So why are the trades overlooked and dismissed?  Maybe it’s time for a second glance . . .
Email Post
Labels: school trade school vocational school

Descartes said…
I heard someone on NPR talk about how America needs more people who create intellectual products-in other words, college grads who want to create the next Google.

Someone called in and said we just need to start making our own toasters again. The guy replied that no one in America should make toasters. Apparently actually making things, repairing things, or knowing how to do anything other than buy things, is no longer the American Way.

John Robison said…
Thanks for your thoughts. Even as we become a throw-away society, there is always going to be a level at which we repair, rather than replace. So we need people with the repair skills. But the trades are not just about repair. They are also about creation, building new wiring, plumbing, etc. And that shades into the artisan sorts of work; we move from pouring concrete house foundations to pouring concrete for statues.
December 11, 2011 at 11:17 PM

Marianne said…
Well said! Trades do not get the recognition they deserve. If they did we may not have such a throw-away society. People would be more likely to enter trades and be motivated to excel. The level of knowledge would increase and things would be fixed more than replaced.

(I have read both your books and loved them. They provide a lot of hope for people on the spectrum. I have long identified with people with autism/Asperger's and after reading your books I m more convinced than ever that that's where I am, and you have given me a lot of hope for the future. God bless.)
December 12, 2011 at 5:28 PM

Penny said…
I attended a presentation by Mark Hamby from Lamplighter Publishing at a homeschool convention. Hamby's finds wonderful old books that are out of print and he brings them back at Lamplighter.

I don't even know how he got onto the topic of learning a trade - that was not what his presentation was about. But he said (I apologize for my paraphrase - this is the way I remember what he said) that trades are being largely overlooked and as teens are looking at colleges and degrees - as important as he thinks those are - he told us NOT to overlook trades, because in his opinion, with such an emphasis on technical degrees and experience, we might see a shortage in other areas. There will be hundreds, maybe thousands of candidates competing for computer jobs - but being a plumber or tree trimmer or carpenter or electrician or other tradesman (or woman) will also pay the bills and may likely be in demand. I've thought about that a lot as my children grow into teens and are looking at career choices.

Forsythia said…
Where would we be without such skilled people? We had new siding put on our house last summer, and a new roof. The contractor and his workers did a great job. Another man has serviced our furnace and A/C for years. He's competent and honest. The plumber came right away and got things working again after my aging mother flushed clumping kitty litter down her toilet/ The list goes on and on. These are not DIY jobs.
December 12, 2011 at 10:26 PM

polyrhythmia said…
We have not just a throwaway society, we also have throwaway workers. This idea that everyone needs to go to college is pure nonsense. I sure wish I had gone into some trade rather than go to college, even if it was studying engineering. I would be miles ahead of where I am now. That is assuming I would have the social skills to get into a trade in the first place. Apprenticeships should be brought back and probably will when we realize we just can't afford to send everyone to college.
December 14, 2011 at 2:36 PM

Pirate_steve said…
O/T,
John, you may not remember me, but you signed my book while you were on tour in Melbourne several months ago. I enjoyed the book, though its apparent to me now that my own problems (related to social skills etc.) are of a different class to yours, and probably less severe (I say this without trying to be arrogant.) This being said, I found "Be Different" to be an enjoyable read, not in the least because it gave me some real insight into how people with Asperger's Syndrome think. I had a diagnosis given by a respectable pediatrician when I was younger, but I've heard that Aspergian symptoms often wane with age (in about 20% of people according to Wikipedia) in some people.

That being said, I agree with you totally with regards to trades, though in my own country of Australia there appears to be less of a bias against careers that involve manual-laboring. This might partially be reflected in the differential in college Attendance between Australia and the U.S. Many trades , in both Australia and the USA, tend to suffer from skill shortages as well, and this is especially prominent in several of the trades, such as being a bricklayer or a Chef, which are considered by many to be either too physically intensive, dirty or lacking in prestige. This being said, I probably don't need to mention the amount of people who enter potentially time and money wasting non-vocational College courses, such as many arts degrees, at the expense of going the route of a blue collar job. This fact was probably mentioned in the book you read.
I'm also pretty cynical of any writer that pegs the recovery of America's economy to creating a more educated workforce, which is a variant of the 'new-economy' trope that writers like Tom Friedman of the New York times have been propounding for the last 10 years, and which I think is best summed up as the fire economy.
Education certainly is important, and this can be evinced by the enhanced economic productivity in much of the western world created by the High School Movement, but it ain't the be-all-end-all.
Regards,
Doug.
December 17, 2011 at 2:05 AM

John Jordan said…
Someone called in and said we just need to start making our own toasters again. The guy replied that no one in America should make toasters. Apparently actually making things, repairing things, or knowing how to do anything other than buy things, is no longer the American Way.
ben and jerry's case study
December 20, 2011 at 8:28 AM

Nora said…
Tied landscaping but i am not good as a sole boss. So no i am unemployed with enough landscaping knowledge to do almost anything. On top of that I don't have the physical strength to work in a job that is 90% brawn to 10% brain.

I'd like to know how you were able to make a business with employees and keep everyone happy Or at least hapy enough not to leave.
December 20, 2011 at 11:07 PM

Anonymous said…
John, what a great point. We need to be more creative in thinking about opportunities for Aspies and non-Aspies alike. Recently I came across a fascinating concept from Leo Babauta of the blog, Zen Habits. I'll share the link here: it's about creative a collaborative co-op to provide skills and training for the unemployed. https://plus.google.com/109926473783208635050/posts/2c6oPBd2XNf is the link to the site. Would love to hear your thoughts about it.
December 22, 2011 at 11:42 PM

Anonymous said…
You forgot "pattern maker" or "furnace operator." It's a deeper problem than what is being presented so far in terms of our economic condition in America. I mean, if I invent a viable form of nano technological assembly pipeline (and Dr. Fernando Auciello at Argonne is getting close) I've just put 80% of people in manufacturing out of work. And this event may occur in my children's lifetime! WHOAH! We have to ask deeper questions the same way the original founding fathers asked very deep questions. What is it to be a human being? Do I have a life's work or do I just choose to be a consumer? How many of us are specialists and how many are generalists? What do we choose to become as economic animals? What is the associated opportunity topology.
January 1, 2012 at 1:11 PM