On the road with April Wine

Every country has it's big rock and roll bands.  We Americans assume the bands that are big here, are big all over the world.  In some cases, that's true.  But every country has its own musicians, some of whom are very popular at home while being totally unknown here.

That's the case right here in Canada, where April Wine is huge all over, yet few in the USA have ever heard of them.  Founded in the 70s they are still on tour today.

April Wine will always be special to me, because I turned 21 on the road with them, riding the ferry to Newfoundland the night of August 13, 1978.

Yesterday I was going to through old papers, and I found my April Wine tour schedule, my tour pass, and an old sound system slide rule calculator.

Lots of people think touring with a band is glamorous, but it's hard, hard work.  This tour had gone on the road in July, touring the Calgary Stampede, and hockey rinks across eastern Canada.  After a short break, the tour resumed August 15 at Humber Gardens, a big barroom in Cornerbrook, Newfoundland.  We played till midnight, then tore down the gear, packed it, and hauled everything through the night to the next night's show at Grand Falls.  We did another one night stand there, and played Marystown the next night.  Then we got a break with two nights at Memorial Stadium in St. Johns.

After that, the tour calendar optimistically says "OFF" for three days, but what we really did was pack all that gear into cases and ferry it to Nova Scotia for the next leg of the tour.  It may have been "OFF" for the musicians, but it most assuredly was not off for us.

Most all our shows sold out; the tour was a huge success for the band.  It was hard work for me, and everyone else who made it happen.

Canadian readers will find a story about April Wine in the opening of Be Different, which goes on sale across Canada in paperback this March. 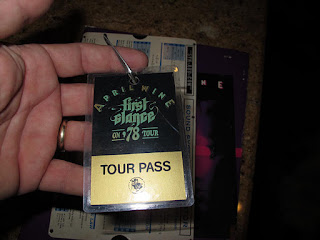 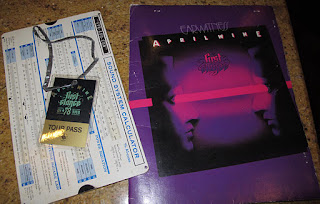 Looking at the tour pass, you can see how I made a lanyard from folded duct tape.  Lanyard cord was scarce, but we always had plenty of tape! 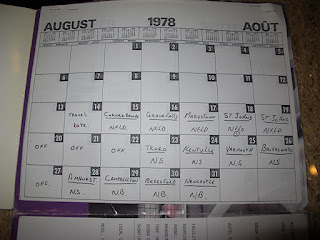 fullsoulahead.com said…
Thank you for reminding me to more fully appreciate all those who work behind the scenes, so that others might shine.

Eric said…
Growing up in Greenfield in Western Mass John, I remember April Wine very fondly. I had a close friend in college who lived outside of Montreal, we had a blast celebrating all the music that Canada had to offer. Sad to say, now that I live on the Gulf Coast, most folks here have never heard of a lot of the Northern bans we took for granted. I'm going through this now with my favorite band The Saw Doctors out of Galway, Ireland. They pack the Calvin every time they come to Northampton, but mention the name here in Florida and you draw blanks.
December 20, 2011 at 5:27 PM

"Little Bear" said…
Cornerbrook was a big hockey rink, not a bar. As I remember, ALL of the sites in Newfoundland were hockey rinks. I vividly remember the score boards and penalty boxes, and walking around the oval "track" surrounding the actual rink (and fixing amps in the same dressing room as the band, prepping for the show). I thought that all "big" venues in Canada doubled as local hockey rinks!
December 20, 2011 at 6:12 PM

Unknown said…
My first rock concert was April Wine at the arena in corner brook. It was called Huumber Gardens. What a show for my first concert Great memories.
August 2, 2020 at 9:56 PM