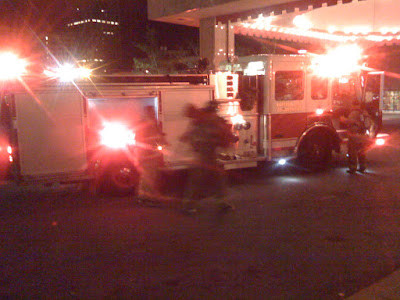 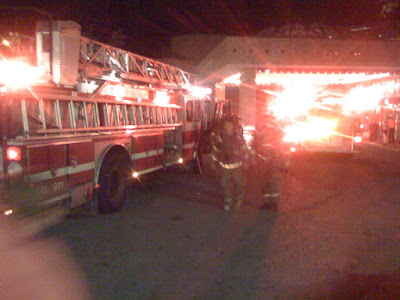 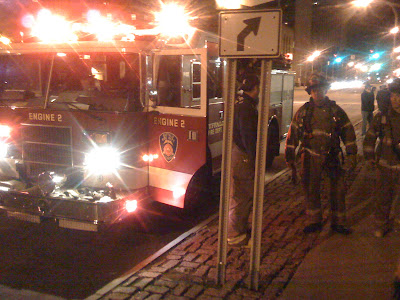 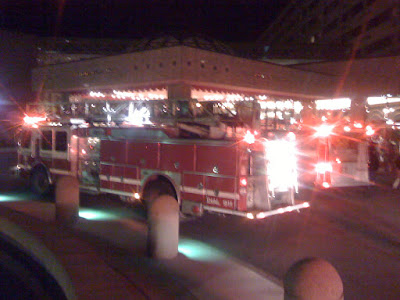 So there I was at nine o'clock on a Saturday night. In my hotel room, on the top floor, settling in for the night. First I heard the howl. The the strobe went off. Then the PA system sounded the announcement. But I was already moving by then. I guess I have a strong sense of self preservation.

I grabbed my shoes, coat, and phone and headed into the hall. A quick look around revealed the exit stairs five doors down. People began pouring into the hall around me, and they followed me into the stairwell. I headed down at increasing speed. That's a situation where Aspergian logic is very good. I don't really think; I just go.

To my amazement, no one single door was open as I descended. The hotel was full, yet I did not meet a single person in the fire escape until the second floor, where people had started to stream through from the upper lobby. I joined the stream down the last flight of stairs and walked out into the night. It was a clear 35 degree night in Buffalo.

There were only about 25 people outside, but more began emerging as I watched. I marveled at the fact that I had reached safe ground from the far corner of the top floor while there were still people in the lobby. Security people began herding people back away from the doors as I heard the approach of sirens.

Within a few minutes we had four fire trucks and they suited up and went inside. It wasn't a big deal in the end - a small cooking fire. Half an hour later,, we got the all clear to go back inside. Of course, there were now 500 hotel guests lined up to use the four elevators, which were still disabled for fire service.

I walked back to the fire escape and trudged back up ten flights of stairs as the fire crew came down. Hopefully, the hotel will not catch fire again before I leave as I have to go to sleep now.
Email Post
Labels: photography stories

We had to evacuate a hotel once when Mia was an infant. Not fun. but necessary. I don't mess around with that stuff - he year the alarm, you LEAVE.

Anonymous said…
Oy vey! You have a lot of misadventures in hotels. :-) I am thinking of the anecdote in Look Me in the Eye with the snake outside the motel doorway.

Holly Kennedy said…
Unreal...I'm glad it wasn't more serious and that it all turned out well, though.

Polly Kahl said…
Holy brown stuff, John, sounds like it was scary, for a few minutes anyway. Glad everyone is okay, especially you.
October 19, 2008 at 4:20 PM

Melody Platz said…
I would have been fleeing down the stairs with you. I take fire alarms VERY seriously. What I can't understand is why everyone else doesn't try to get out like me. Usually, I see people gazing around trying to decide if it's worth leaving.

For me it is always better to be safe rather than sorry.

Jenn said…
My 4 yr old (autistic) son had the misfortune of having a fire drill on his first day of school. I am still hearing about it, as it was very difficult for him. He is still very speech delayed but has managed to tell me "No fire" everytime I drop him off at school now.
I'm glad you managed to get out calmly and safely. I wonder why everyone else was so slow? What where they waiting for? You hear an alarm - you get out. Sometimes neurotypical people are odd.
October 23, 2008 at 10:44 AM