Me on Boston television, and some thoughts on prosperity, place and happiness

I drove to Boston today to do a short segment on Boston television. You can watch it here:

Here I am with the news anchors: 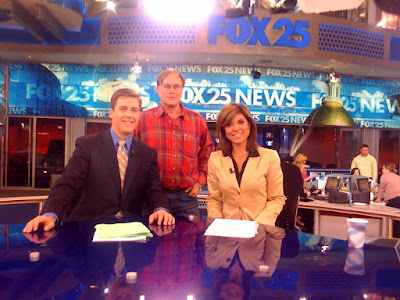 FOX25 has a striking new studio facility, with state of the art equipment, plenty of space, a big staff and anything a news person could want. Why not? They can afford it . . . They're a leading station in the #7 market in the United States.

My home town, Springfield, is market #111 according to Neilsen. We're more of a backwater. You can find your own city here:
http://www.nielsen.com/pdf/2008_09_DMA_Ranks.pdf

I've visited quite a few television stations recently, and I was struck by something today . . .

The producer and all the staff at FOX were happy, friendly, engaged, helpful . . . all of those things. They seem to like their jobs. No one looked miserable. The people all wore nice clothes and the parking lot was full of nice cars. It was a big, expansive studio. A first-rate place, no doubt about it.

Within the past few weeks I've also visited Buffalo, New York, and Dayton, Ohio, two of the more depressed cities in the US. Their television stations looked somewhat threadbare in comparison. They were clean and neat, but the equipment was well used. It was long past the age where FOX25 would have retired it, if what I saw is any example.

The people on the street in those cities are dressed economically, and the cars are older, compared to Boston. In Buffalo, it seems like every third storefront on Main Street is boarded up. In Boston, you have to struggle to find a single vacant spot in the heart of town.

There are huge differences between Boston and those depressed cities. Per capita income - one comparitive measure - is several times higher in Boston.

The people in Dayton and Buffalo were just as happy, friendly, engaged, and helpful as the folks at Boston's FOX25. They also seem to like their jobs. None of them looked miserable, either. Their clothes may have been plainer but they were neat and clean and the people on the street were the same.

The contrast in property and objects was striking. Given that contrast, the sameness of the people was equally striking.

Many studies have found the same thing . . . once you get above a subsistence level (which varies quite a lot from place to place) and meet the need for basic necessities, extra money and more things does not buy much more happiness, if any.

But there's one caveat . . . . As long as everyone around you is in the same boat.

Everything looks threadbare in those rustbelt cities, and the average person is just like everyone else. He's therefore just as happy as the average person in Boston or Seattle, where everything looks new. But if you put that average fellow from Boston into an average apartment in Buffalo, he'd be bummed, for sure. Relative position is what seems to matter, once you have the basics.

Anyway, I just realized what a powerful comparison it was. I was thinking how happy and friendly the people at FOX25 were, and how nice the place was. And I couldn't help but think the same good things could be said of the people I met in those poor places, despite the physical surroundings. The guys running the old gear with the paint rubbed off had exactly the same geek pride as the guys in the brand new state of the art studio. The physical surroundings seemed to have no effect on how they felt. We all read ideas like that all the time, but somehow they strike you differently when you experience it firsthand.
Email Post
Labels: media

jess said…
you know, a few weeks ago, i went to a local pub for dinner with my husband and a couple of friends. there was a guy set up in the corner with an electronic keyboard and a guitar. he was singing his heart out and doing justice to some of my favorite pop country tunes.

he wasn't going to be headlining a concert any time soon, but he held his own.

and he was HAPPY. i was absolutely dumbstruck at how HAPPY this guy was. he looked FREE. i marveled at this raw, unabashed display of JOY.

i must have said it 3 or 4 different times to my friends. 'Dang, look at how friggin happy that guy is.' they started to look at me funny, so i let it go.

but it is amazing to see the contrast (with the people who DO look miserable) - when you see people doing what they obviously love to do, they do seem to need less. the gratification, the satisfaction is in the DOING, the JOURNEY itself, the destination or external reward notwithstanding.

i envied that guy, singing his heart out in an old threadbare studio with old camera equipment or, er um a tiny suburban pub
October 22, 2008 at 7:47 AM

Kim Rossi Stagliano said…
John, good observation. Imagine what someone from a third world nation would think of even our most depressed cities. Life is a matter of perspective. What is rich? What is poor? Madonna has 500 bazillion dollars and yet has she ever had true love? Men divorce beauties like Christy Brinkley and Jennifer Aniston. Aren't they perfection? Beauty, happiness, self-satisfaction, and a sense of worth come from within.

China said…
"As long as everyone around you is in the same boat" also speaks to how important community, friends, and a social network can be. You need people to get through life. That's why it is important for us parents to teach our spectrum kids social skills and help them make friends.
October 24, 2008 at 1:44 PM

Strange Behaviour said…
My daddy always said that money can't buy you happiness, but it sure can buy you some good stuff!
In "Fiddler on the Roof" Tevye's prayer went something like this: "If money is a curse- may the Good Lord smite me with it!"
October 24, 2008 at 10:09 PM